Look, ummm, here's the thing. I really liked Saint Maud, let's make that clear. But everyone else LOVED it. I almost loved it, were it not for the fact that it is a film in which you can see the ending pretty much coming from the very first scene. There's nothing really wrong with that, but it does take a little something away from the whole experience.

As a movie, Saint Maud is very good. As a feature debut from writer-director Rose Glass, it is a remarkably accomplished piece of work, one that explores faith, mental health, and also what it takes to be a person who cares for someone who is dying. Glass brings these elements together with no small amount of skill and care, helped by a central performance from Morfydd Clark that will, if there's any justice in the world, raise her profile immensely and see her offered many more roles worthy of her talents (although she already has a decent body of work to her name, just nothing on this level).

Clark is Maud, a young woman who is now tasked with caring for the dying Amanda (Jennifer Ehle). While helping to tend to her body, Maud seriously works on also saving Amanda's soul. She does this by having conversations with her about god, but also by trying to warn away those she sees as being corrupting influences (namely a woman named Carol, played by Lily Frazer). Something has happened in Maud's past though, something that may have shaken her faith in her own abilities to properly care for patients, but it remains to be seen if Maud has learned from that mistake/incident or whether she still has much to learn about dealing with terminal illness.

Dark and grim throughout, perhaps the best thing done here by Glass is making the whole film easier to appreciate and experience, even as you know that it's heading down a tunnel that will just get darker and darker. She does this with the very smallest crumbs of humour, and also by walking that fine line between showing things in an unflinching way and making the whole thing too uncomfortable for people. There's also some fantastic audio work going on, and an interesting and impressive score by Adam Janota Bzowski.

The other big plus is the central relationship between Maud and Amanda, both played to perfection by the leads. Amanda is understandably weary and cynical, but also has moments in which she seems to genuinely respond to the young woman caring for her. Ehle portrays her with aI  mix of exhaustion and sly humour. Maud is a young woman hiding herself in various ways, whether it's using different names, blotting out thoughts with alcohol and/or sex, or her religion, itself perhaps more akin to a fairytale story in which she can make herself the heroine at the heart of it. I really can't accurately describe how good Clark is in the role, it's a star-making turn in a film that may sadly prove too difficult for some to stay with until the very end (not a criticism at all, it's just mature and difficult content that isn't an "easy sell"). What could have easily been a performance made up of twitches and nervous energy is instead sold in a very real way. Maud often knows not to tell other people what she is thinking, although she sometimes can't help herself, and a lot of the film has her trying to restrain herself while exasperated by a world around her that seems impossible to save. Frazer is a good shot of energy in the role of Carol, and Lily Knight plays Joy, a young woman who knew Maud in her past and has one or two conversations with her that helps to clue viewers in to the fact that something has happened in the past that hopefully won't be repeated.

Again, to clarify, I really liked this. You'll be able to read a dozen other reviews from people who absolutely loved it. I just don't think it was perfect, mainly because of the predictability of the material. I do, however, think Glass has delivered one of the best feature debuts in recent history, and I appreciate both that and the fact that she's brought the huge talent of Clark to my attention. 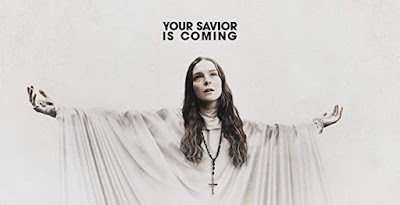