Danny Trejo is a badass. You know it, I know it, everyone has been well aware of it for years now. But in this movie he IS Bad Ass. He gets his own theme tune and everything, which makes it all impossible to deny.

Springboarding from a real incident (shown here on YouTube), Bad Ass is all about Frank Vega (played by Trejo), a man who hasn't had much luck since the days that he spent serving his country in the war. Time and opportunities kept slipping away from him until he was an old man without much in his life. But all of that changes when he retaliates against two thugs on a bus and the whole incident is recorded by witnesses and uploaded online. Frank becomes a hero though he doesn't think of himself as a hero. He just wants to get on with his life and be left in peace. But it's not long before more violence occurs in his life and he has to continue being a badass while others are left to clear up the mess.

I, and many other movie fans that I know of, think Danny Trejo is great so I'm happy to see him getting more lead roles than ever before. His biggest role might always be Machete but films like this one are good enough to keep fans happy, even if they aren't actually great.

Directed by Craig Moss (who also pitched in here and there to tweak the screenplay by Elliot Tishman), the movie is an easy sell to anyone who has enjoyed films such as Walking Tall, Urban Justice, Death Wish and Harry Brown. The fact that it has Trejo in the lead role and a supporting cast that includes Charles S. Dutton, Ron Perlman, Richard Riehle in a small role and Craig Sheffer in a blink-and-miss-him cameo also helps. Joyful Drake and young John Duffy may not be as well known but they're likeable enough in their roles.

Sadly, other aspects of the movie are quite poor. The action isn't too bad but the script is weak, and laughably bad in places, and the actual plot is a bit cheesy and ridiculous (e.g. the moment in which Frank Vega easily finds some evidence missed by police). Then we have the way in which Frank gets to know his neighbour, Amber Lamps (Drake, playing a character actually named as a nod to the way in which the word "ambulance" was said by the asswhipped idiot in the original, real life event). It's just unbelievable even if it allows for a number of nice domestic scenes showing a softer side of the character, and a softer side of Trejo.

So it's unbelievable at times, cheesy and ridiculous and has a very weak script. Despite those flaws, I still can't help rating the movie above average because Trejo is just so enjoyable in the lead role. 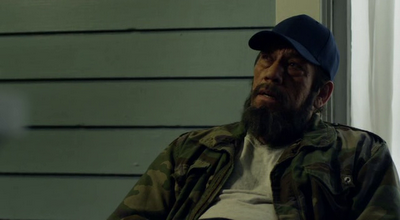