Blood Simple is the fantastic neo-noir that announced the arrival of the Coen brothers as a fantastic talent to keep an eye on. Joel and Ethan shared writing and directorial duties (although Ethan is uncredited in the latter department), and their working M.O. hasn't really changed in the near-thirty years since. Which, when the results are so often this good, we can all be thankful for.

Dan Hedaya is the wronged husband who hires a sleazy detective (M. Emmet Walsh) to deal with his wife (Frances McDormand) and her lover (John Getz). What unfolds is a tale of treachery, confusion and mistaken identity, all shown in scenes that deliberately take time to dwell on the nastier moments. This isn't a gratuitous movie, but it's also not a movie wanting to gloss over any pain or death that could otherwise just be used as a stepping stone from one cool moment to the next.

The script is pretty lean, but has a few great lines of dialogue in there (especially from Walsh), and the direction is impressive in the way it chooses to show the events in a manner that's almost cold and clinical at times. This is noir with a roughness, slick in the way it is all played out, but also slick with blood.

John Getz is a little bit bland in his role, but he's just a man caught up in the midst of a very bad situation. Nobody here garners a great deal of sympathy, especially not Hedaya or Walsh, so Getz is someone to root for by default, not by his character or moral compass. McDormand is aloof at times, with the Coens enjoying playing with viewers who will wonder whether she's a classic femme fatale, or also just a victim of circumstance.

It's also worth noting that one Mr. Barry Sonnenfeld worked on Blood Simple as the DP (a role he would fill again for the Coens with work on both Raising Arizona and, arguably his best, Miller's Crossing).

The film looks fantastic, especially for a debut feature, contains some great performances and some of that pitch black humour that the Coens have since become famous for. If you like their work then you'll certainly enjoy this. Simple. 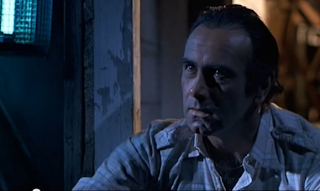