In the opening scenes of The Last Seduction we find out that the lead character, Bridget Gregory (Linda Fiorentino, in her best ever role), isn't very nice. She's smart, but not very nice. Just how smart she is, and how nasty, only becomes clear as the plot unfolds, and things move towards a fantastic, dark, entertaining climax (no pun intended, considering the libido and confidence of Bridget).

Directed by John Dahl, and written by Steve Barancik, The Last Seduction is one long con game being played out by Bridget, a woman who has left her husband (Bill Pullman) with a bag of money that he made from selling drugs. The husband owes money to people who tend to damage his thumbs whenever he can't pay so he's understandably angry. Bridget continues to plan her exit strategy, biding her time in a small town that has very little going on, but allows herself some fun with a local boy, Mike (Peter Berg). Poor Mike doesn't realise that he's about to be involved in some wild mind games as Bridget coldly lines up all of the pieces for her big play.

John Dahl is a fine director  (having also given audiences the superb Red Rock West and Joy Ride AKA Roadkill) and he does himself a few favours here by working with a superb script, by Steve Barancik, and assembling a cast all doing some of their best work. Fiorentino, especially, hasn't had any better role to sink her teeth into, but Berg is great as the small town boy who dreams of bigger things, Pullman is surprisingly good in an atypical role for him, J. T. Walsh does his usual stellar work in an all-too-brief role, and Bill Nunn does well as a detective hired to find Bridget/the money. Dean Norris also has a very small role, alongside Brien Varady, the two of them playing friends of Mike who don't waste their energy on big dreams and are just happy with small town life.

Everything comes together perfectly to make this a real treat for fans of neo-noirs. The script is chock full of great lines and exchanges, the characters are all memorable (even the more minor characters like the poor schmuck, played by Mik Scriba, who is tasked with tailing Bridget), and the lady at the centre of events is one of the best femme fatales ever. Very smart, very sexy, and as cold-hearted as they come. Which always makes things more fun in the world of noir. 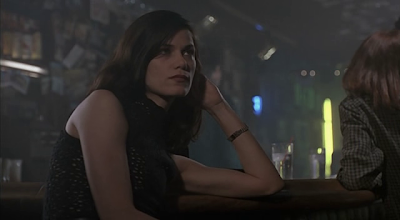