While investigating the death of a man named Samuels (Sam Levene), a Police Inspector (Robert Young) starts off with one prime suspect (an army lad named Mitchell, played by George Cooper) but soon realises that there may be more to the crime. Mitchell has Keeley (Robert Mitchum) on his side, but there's also someone (Montgomery, played by Robert Ryan) who seems determined to help the police strengthen their case against Mitchell.

Written by John Paxton, and based on the book by Richard Brooks, Crossfire is an enjoyable, dark thriller that also takes some time to highlight the ugliness of anti-Semitism while never feeling too preachy. There are one or two moments that stop the action in order to make a major point or relate an appropriate moral anecdote, but the performances from everyone onscreen ensure that the film never feels as if it's trying too hard to make its points.

Director Edward Dmytryk does a decent job, but most of the groundwork is laid out by both the fine script and the casting of the lead roles.

Young is great as Finlay, a conscientious policeman who doesn't take long to suspect that he may have been put on the trail of the wrong man. Mitchum doesn't have too many scenes in the movie, but he does well with what he's given. Cooper may be a bit weak in his role, but this works just fine, considering the nature of his character. Last, but far from least in this little tale of death and deceit, we have Ryan, who excels with a performance that makes him easy to hate. Gloria Grahame and Jacqueline White both do good work, with the former especially enjoyable as an unhappily married woman who may be able to provide Mitchell with a vital alibi.

It may be, in many ways, a low-key movie that focuses on characters more than major plot twists and turns, but Crossfire still manages to be surprisingly enjoyable and exciting from start to finish. It's well worth a watch. 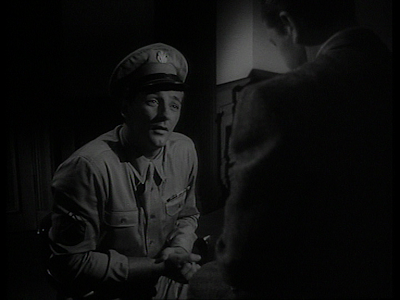