The directorial debut of John Dahl, Kill Me Again is an enjoyable neo-noir that suffers in comparison to the future films that Dahl would deliver (most notably, The Last Seduction, but also the great Red Rock West).

Things start off with Fay (Joanne Whalley, billed here when she was Joanne Whalley-Kilmer) and Vince (Michael Madsen) making away with a suitcase full of stolen money. It turns out to be a lot more than Vince thought it would be, leading him to start worrying and considering where they can go to lie low. Fay doesn't want to lie low, so she gets Vince out of the picture and heads off on her own. Well, on her own with the suitcase full of money. Knowing that Vince will be in hot pursuit, Fay contacts a private eye (Val Kilmer) and asks him to help fake her death. She doesn't tell him the truth, of course, but she tells him enough to get him interested, with the bit about paying him $10,000 - an amount that he owes to people who are happy to hurt his fingers - probably the most interesting part. Things go according to plan . . . . . . . up to a point. Then, almost inevitably, things start to go awry.

Both Kilmers do well in their roles, with Val Kilmer playing the standard detective part well and Joanne Whalley being suitably sexy and manipulative. Michael Madsen remains a credible threat throughout the film, and there's a small role for Jon Gries (an actor I always enjoy watching, especially in '80s fare). Unfortunately, nobody else really stands out, good or bad, and the main characters aren't developed well enough to make the whole movie great. It's quite good, with the main problems being the pacing and a loose feeling to the whole thing, but it's not great.

Dahl, who also co-wrote the screenplay with David W. Warfield, shows his potential here, but also can't hide the fact that this is his first directorial feature. He has a good sense of style, and the script has a decent "skeleton" to it, but there just isn't enough good stuff fleshing out the movie beyond the main plot points.

It's okay, worth giving some time to if there is nothing better available, but it should have been more exciting, a bit sexier and a bit less . . . . . . . slapdash. 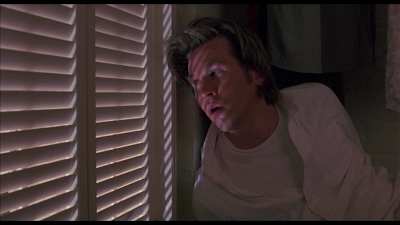