While it's no classic, and certainly a rung or two below The Glass Key (a film sharing many of the cast members), there's some easy fun to be had with The Blue Dahlia, a film written by Raymond Chandler and directed by George Marshall.

Alan Ladd plays Johnny Morrison, a man who gets home from military service to find that his wife (Doris Dowling) hasn't exactly been sitting at the window with a lamp on, awaiting his return. She's been living it up, particularly enjoying the company of Eddie Harwood (Howard Da Silva). The husband and wife argue, the husband storms out, and later that night there's a murder. It looks like Johnny is the man the police desperately want to get a hold of, but his friends, played by William Bendix and Hugh Beaumont, don't want to see him imprisoned. Even if they suspect that he may have done it. Johnny also finds an ally in the shape of a woman (Veronica Lake) he doesn't realise is actually Mrs. Harwood.

The Blue Dahlia may not have the best script or the most thrills, but it's an enjoyable enough watch, thanks mainly to the characters populating the onscreen world. Ladd has always been more of a stoic than charismatic lead, but that suits just fine in a film such as this. Lake is always captivating, Da Silva is enjoyably slippery and nobody does the big lug quite like Bendix. Will Wright, Tom Powers and others all help to keep boredom at bay.

There aren't any surprises here, no twists and turns beyond those that fans of crime flicks will see coming a mile away, but everything moves along well enough. There's a final scene that ties up any loose ends, without spending more time than necessary on each detail, and every element onscreen is at least competent and satisfying, despite being unspectacular and a bit lacking in excitement. Still worth a watch though, especially for anyone who enjoys the movie stars of this era. 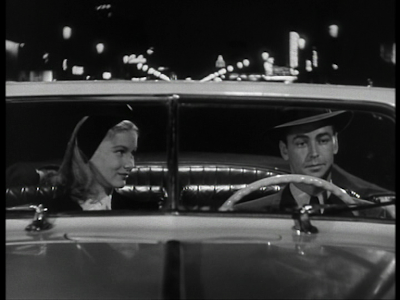