Alan Ladd stars as Philip Raven, the hired gun of the title. He gets in some hot water when his latest employer, via a cowardly middle man (Laird Cregar), pays him his fee in bills that have been reported as stolen. Out for revenge, Raven soon finds himself dragging the beautiful Ellen Graham (Veronica Lake) into his plan. Unfortunately, Graham has a boyfriend who is in the LAPD (Michael Crane, played by Robert Preston), and it's not long until the net starts to close in around them.

Based on a novel by Graham Greene, this is an enjoyable film noir, but it's the least of the Ladd-Lake pairings in this style. Lake, especially, isn't treated well in the first half of the movie, being given a couple of minor musical numbers that feel out of place.

The script by Albert Maltz and W. R. Burnett isn't too bad, those musical moments aside. It keeps the character of Raven interesting, even if he's not very likeable, and lines everything up in time for a satisfying finale that ensures viewers are rooting for the right character by that point.

Director Frank Tuttle does well enough, but I can't help thinking that he could have done better with the cast he has.

Ladd is as good as he usually is in this type of role, Lake is luminous once again, and Crane is solid, but it's the supporting cast members who raise this above average. Cregar is a fantastic, conniving, coward, a man easy to dislike while remembering that he would always have someone else giving him orders, and Pamela Blake makes a great impression, despite only having a couple of scenes. She plays a young woman who dislikes Raven, with good reason, and her performance is a spirited mix of anger and fear.

Having only recently discovered both Ladd and Lake on film, I must say that they have yet to disappoint me. While This Gun For Hire may be the weakest of their film noirs, it's still a good film, and I don't think fans will regret giving this, or any of their other collaborations, a watch. 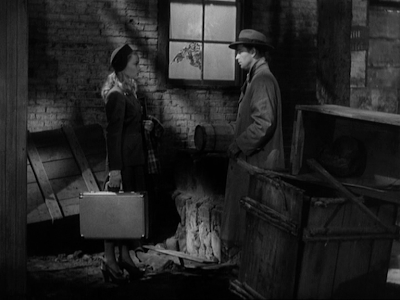