Directed by Ida Lupino, who also co-wrote the screenplay with Collier Young, The Hitch-Hiker is a thriller, based on a true story, that will please fans of noir, and also fans of The Hitcher, of course.

William Talman is the dangerous man who gets himself into the cars of unsuspecting folks before eventually killing them. When he gets into the car of two men (played by Edmond O'Brien and Frank Lovejoy) he thinks he has caught a lucky break. The men have told their wives that they are off hunting in some isolated region, when they were actually headed down Mexico way for a little bit of drinking and dancing. The hitch-hiker figures that they have a lot of time until the men are thought to be missing, time that should keep them alive.

Sleek, taut and always entertaining, The Hitch-Hiker fairly rattles along for its 70-minute runtime. Widely considered to be the first American mainstream film noir to be directed by a woman, this probably shook up audiences a fair bit in the early '50s, especially anyone familiar with the true story (of a man named Billy Cook) that it was based on. Daniel Mainwaring wrote the story that turned into the script, but received no credit.

The three main actors all do a fine job, convincingly on edge and covered in a sheen of perspiration for most of the movie, with Talman especially good as the villain of the piece. There are other people appearing onscreen, but this is a three-hander, for the most part, and nothing ever takes viewers away from that tense situation for too long.

Lupino directs well, with her best work probably being the pace of the movie. Too long just in the company of the three men and it would be quite draining, too many interruptions from other scenes and the tension would evaporate. This gets things just right.

If you've seen any other "dangerous hitch-hiker" scenario onscreen then you owe it to yourself to see this one. 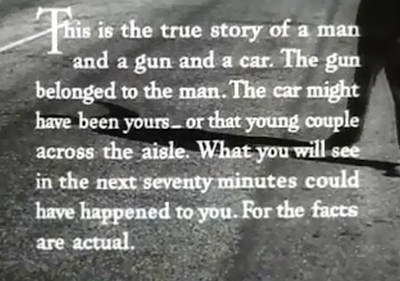