Many thanks to the GGTMC for their fantastic interview with Thomas Jane from some time ago that turned me onto this film (and, indeed, made me an even bigger fan of the actor).

Thomas Jane and Lauren German star in this interesting neo-noir that wobbles constantly between thriller and horror movie territory. It may feel like little more than an extended episode of The Twilight Zone as the end credits roll, but that's no bad thing.

Jane plays a man who has just woken up in a motel beside his new bride (played by German). The two of them have only recently met - one of those crazy, drunken nights in Las Vegas - and they're about to set off down the road to start their new life together. Unfortunately, that new life together is interrupted when they find a seriously wounded man in the middle of the highway. The near-dead man has a hugely disfigured face and a disconcerting way of putting the newlyweds on edge as they try to help him. Does he know something about one, or both, of them? Something that, perhaps, one hasn't yet shared with the other?

Written by Tab Murphy, and directed (very well, I might add) by Jane, Dark Country is a homage-packed love letter to the crime and noir movies of the past. Even I spotted more of the obvious references, and I'm sure that those more familiar with the sub-genre will find many more. The sardonic voiceover is there, the rear projection is deliberately obvious during most of the driving scenes and many of the scenes are processed in a way that makes the whole thing feel a bit older than a 2009 release. It's nicely done.

Of course, being the type of film that this is, the characters are far from flawless, and each has a moment or two of being a bit too rough on the other one. Viewers will start to wonder if German is a standard femme fatale one moment, the next they will just be thinking of Jane's character as, to be blunt, a bit of a bastard.

While it's not going to win any awards, this is a great little movie that keeps things entertaining while wearing plenty of influences on its sleeves. Sit back, strap yourself in and go along for the ride. 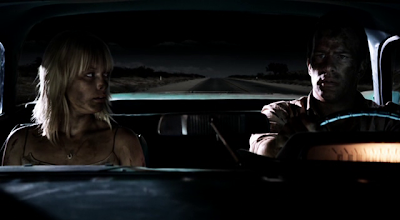