Film noir purists may shake their head at The Big Steal being in the same company as movies such as The Killers and Double Indemnity, but that doesn't make the movie itself any less enjoyable.

What The Big Steal lacks in darkness and grit, it more than makes up for with charisma (thanks to Robert Mitchum in the lead role) and a cracking script.

Mitchum is a man who has been accused of robbery. To clear his name he must capture the real thief (Patric Knowles), a man who is also being pursued by a woman named Joan Graham (Jane Greer). The two pursuers initially mistrust one another, but end up joining forces to get to their target. Meanwhile, William Bendix plays a man who is chasing Mitchum and Ramon Novarro is an Inspector General who suspects that something is going on right under his nose, but allows everyone to go about their business while he keeps tabs on them.

Directed by Don Siegel, this feels more in line with adventure movies than film noirs. It's worth noting, however, that the script (by Daniel Mainwaring and Gerald Drayson Adams) has some great twists and turns in there. The first scenes play around with the identities of the main characters while the third act mixes some tension with one or two fun reveals.

Mitchum, who began his career in the 1940s and seemed to spend the next two or three decades making up for lost time, gives a wonderful performance here. He's as tough as he needs to be, and also charming enough to keep Greer, who holds her own alongside him, on his side. Knowles and Bendiz are both just fine, but it's Novarro who steals a number of scenes as he hides his intelligence behind a fumbling exterior.

While it's unlikely to make any "best of..." lists, this is a fun time from start to finish, especially for fans of the main stars. 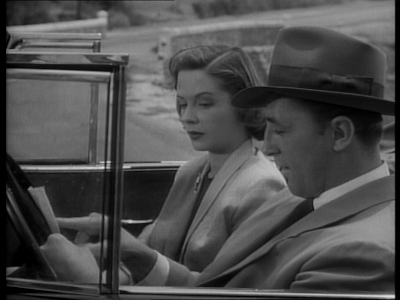