Robert Mitchum stars in this classic film noir, directed by Jacques Tourneur and written by Daniel Mainwaring (using the name Geoffrey Homes to adapt his own novel, "Build My Gallows High).

When Mitchum first appears onscreen he is just Jeff Bailey, the owner of a gas station in a small town, causing small ripples with his blossoming romance with Ann Miller (Virginia Huston). It's not long until we find out about Mitchum's past, due to the appearance of a man named Joe (Paul Valentine). Joe wants Jeff to accompany him to meet up with a gangster named Whit (Kirk Douglas), which leads to Jeff having to tell Ann all about a tale from his past that he'd hoped to forget. A tale of love, crime and a woman named Kathie (Jane Greer).

A film that moves from relative light to darkness, Out Of The Past is noir in an almost literal sense, as a shadow falls over the life of the main character and starts to grow, consuming him and keeping him in its clutches. For fans of noir, and this film in particular, there's a much better review here by Christianne Benedict (damn her for being such a consistently better wordsmith and more knowledgeable cinephile than I am). But I will struggle on and try to write down my own thoughts on the film.

As you might expect from the talent, both onscreen and off, this is a class act, through and through. The script is very good, packed with information and small details that all feed into the plot, but the emphasis is on the visuals, as Mitchum is consumed by a past that he thought he'd escaped.

By the time the third act comes along, viewers may sense an air of fatalism. Many noirs have that aspect, but this one is more poignant than most. Mitchum is an anti-hero with a better heart, a character less deserving of any bad luck than most from these movies. Of course, he makes a few bad decisions, but he does so out of love, as opposed to greed (although it could be argued that such a strong love IS a form of greed).

The cast all do a great job. Mitchum may have been better, in my opinion, showing the cheeky charm that he showed in The Big Steal, and his best performance remains the peerless Night Of The Hunter, but he's very easy to like here, he's a flawed character that everyone will root for. Douglas is a great bad guy, all the more dangerous for being so charming and pleasant. Huston is sweet as Ann Miller, perfectly balancing out the cool, twisty turn by Greer as Kathie.

Rightly regarded by many as one of the classic film noirs, Out Of The Past manages to check all of the boxes, and deliver style and entertainment in spades, while still twisting things subtly to help it stand out from the pack. It also, unlike many other (still great) films in this style, manages to marry the cool, thriller aspects with some real heart. 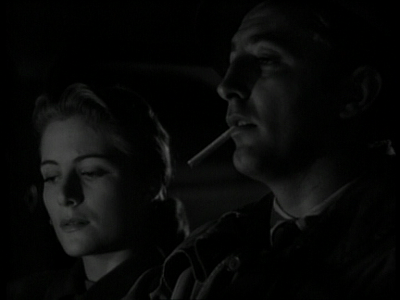