A decent thriller written by Peter Dexter and directed by Lee Tamahori, Mulholland Falls is one of the best films I've seen recently without having heard any praise for it beforehand. It has some nice period detail, decent plotting and one or two good set-pieces, but the whole thing is made well above average by the superb ensemble cast.

Nick Nolte is the main character, a man investigating the death of a beautiful young woman (Jennifer Connelly). Unfortunately, that young woman was caught on film having sexual relations with one or two men, one of them being a very important General (John Malkovich). And the other being Nolte, which puts him in a bit of a compromised position, especially as he tries to keep his infidelity hidden from his wife (Melanie Griffith). As the investigation continues, moments of violence punctuate the proceedings while Nolte heads on a path that may not end well for him.

As I have done before, let me just sell this movie to people by reeling off the names from the cast list. Nolte, Connelly, Griffith, Malkovich, Michael Madsen, Chris Penn, Chazz Palminteri, Treat Williams, Bruce Dern, Daniel Baldwin, William Petersen, Rob Lowe, Louise Fletcher and Andrew McCarthy. A few of those people only appear for a moment or two, in an uncredited cameo role, but that's still a mighty fine selection of talent.

Everything is in place, with the look and feel of the movie perfectly capturing a bygone era, but it's also not spectacular in any way, with the exception of the cast. The script sadly leaves a couple of the main characters just lingering in the background of many scenes, while Tamahori deals with the material in a clean, unshowy manner, relying on the story and the characters to hold the interest of viewers. Well, although I know that many others will feel differently, that worked for me.

Not one to easily recommend to people, I will still take the plunge and . . . . . . . . . . recommend it to people. It oozes quality from start to finish, and I hope that more people like it as much as I do if/when they give it some time. 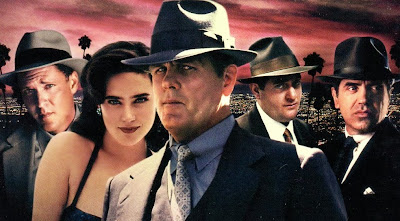