AKA Farewell My Lovely

Dick Powell stars as private eye Philip Marlowe in this adaptation of a Raymond Chandler novel that entertains while never really attaining greatness.

Marlowe's day starts when he's asked by a big moose of a man (Moose Malloy, played by  Mike Mazurki) to track down a woman he loves. Moose turns out to be a bit of a hard man to keep passive, but that's only the start of Marlowe's worries. He then agrees to accompany a man (Lindsay Marriott, played by Douglas Walton) as an exchange is made - cash for a stolen necklace. The exchange doesn't go according to plan, and Marlowe finds himself getting deeper and deeper in trouble, thanks, he suspects, in no small part to Mrs. Helen Grayle (Claire Trevor) and her step-daughter, Ann (Anne Shirley).

Adapted for the screen by John Paxton, and directed by Edward Dmytryk, Murder, My Sweet has some decent dialogue and an entertaining cast of characters (with Moose Malloy particularly reminsicent of some Dick Tracy hoodlum), but nothing feels quite as sharp as it could be.

Powell isn't terribly charismatic in the lead role, which ultimately drags the whole film down a notch, and the two main ladies also fail to really create any sparks, although both do slightly better than anyone else onscreen, with the exception of the enjoyable Mazurki. Donald Douglas is good as an exasperated Police Lieutenant, but Otto Kruger and Ralf Harolde are both instantly forgettable as soon as they move offscreen.

Fans of this type of movie WILL find enough to enjoy here. The plot twists together nicely, a few one-liners tickle the earlobes and the finale is enjoyable and satisfying. But there are many other movies more deserving of your time. 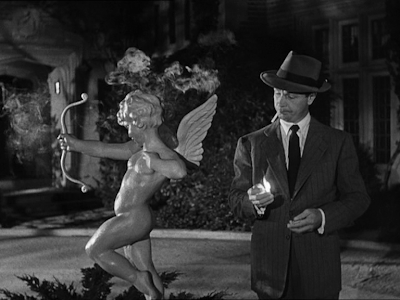