"Voilà! In view, a humble vaudevillian veteran, cast vicariously as both victim and villain by the vicissitudes of Fate. This visage, no mere veneer of vanity, is a vestige of the vox populi, now vacant, vanished. However, this valorous visitation of a by-gone vexation, stands vivified and has vowed to vanquish these venal and virulent vermin vanguarding vice and vouchsafing the violently vicious and voracious violation of volition.The only verdict is vengeance; a vendetta, held as a votive, not in vain, for the value and veracity of such shall one day vindicate the vigilant and the virtuous. Verily, this vichyssoise of verbiage veers most verbose, so let me simply add that it's my very good honor to meet you and you may call me V."


It's sometimes heavy-handed, it's sometimes simplistic, it's NOT The Matrix (which is what many expected, I think, when this was heavily pushed as being from the Wachowskis, who wrote the script), but V For Vendetta is also absolutely brilliant stuff that packages some very interesting ideas in a mainstream blockbuster form. A lot of the themes explored in the movie are scarily pertinent to civilians living in first world countries nowadays and it's nice to be able to enjoy something so subversive that also has a couple of good action scenes thrown in for good measure.

Natalie Portman plays a young woman, Evey, who has her eyes opened one evening when she is saved from a nasty situation by a masked terrorist, V (Hugo Weaving, behind a Guy Fawkes mask for almost the entire runtime). V takes a liking to Evey, but things get complicated when she gets in the way during another of his spectacular strikes against the repressive government. This means that Evey becomes almost as wanted by the authorites as V, but one policeman (Stephen Rea) starts to dig around and starts to see what V might be trying to show the entire nation.

Directed by James McTeigue, and developed from a graphic novel by David Lloyd and Alan Moore, this is an action movie not designed for those who need a fight sequence every few minutes. It's paced carefully, allowing more time for the dialogue and ideas than the actions that they necessitate.

The cast all do a fantastic job. Portman just about carries off her English accent from start to finish, despite a few wobbles, and Weaving somehow invests his character with so much wit and intelligence that the mask he wears SEEMS expressive, despite the fact that it never really changes. Rea can do the tired, hangdog act about as well as it can be done, and his performance here is a treat. The casting of John Hurt as the leader in a Big Brother world may be a bit of a stunt, but it works. Elsewhere, Stephen Fry does a great job (perhaps, mostly, because he's voicing opinions that don't require him to stretch himself in the acting department), Tim Pigott-Smith and Rupert Graves do well with lesser roles, and Eddie Marsan, Sinead Cusack and Imogen Poots also do well, despite very limited screentime.

But the cast have the Wachowskis to thank (who can, in turn, thank Lloyd and Moore) for such great material. Love or hate their movies, it's hard to argue with the fact that the siblings have succeeded more than any other modern film-makers in packaging smart and/or potentially off-putting material into mainstream blockbusters.

I liked V For Vendetta when I first saw it, but now I love it. Part of that is, undoubtedly, to do with my recent, growing displeasure with the British government and the ever-growing economic divide. But a lot of it is to do with the fact that it's just a bloody great film. 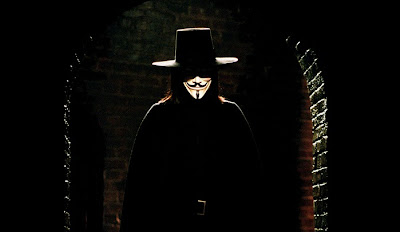