Brian Donlevy plays the central character in this enjoyable film noir, but the movie really belongs to Alan Ladd, playing his smart, loyal, right hand man. And the fact that Veronica Lake is also in the cast means that she steals many scenes simply by being as beautiful as she is.

The story, by Dashiell Hammett, is all about a smooth criminal named Paul Madvig (Donlevy) who wants to straighten up his act and move forwards in life. This is due, in no small part, to his falling for Janet Henry (Lake). As Paul starts to ruffle some feathers, particularly those of a crook named Nick Varna (Joseph Calleia), he finds himself being set up for a big fall. A murder rap could be pinned on him, and it could be hard to beat. Thankfully, his friend, and star employee, Ed Beaumont (Ladd) is also hard to beat, and he keeps digging around to find out who the real murderer was and how everything is being laid at Paul's feet.

Directed by Stuart Heisler, this is an unspectacular film that eventually blossoms into a thing of subtle beauty. Early scenes make viewers prepare themselves for another standard crime flick, but as Ed starts to use his intelligence while so many other people use fists and/or bullets it goes from strength to strength.

Ladd may not be the most charismatic actor to have graced the silver screen, but in the latter half of the film he does perfectly fine as someone who won't give up, no matter how much others try to deter him with threats and beatings. Donlevy is wonderfully smooth, and often a step or two behind Ladd's character, in the role of Paul, making him a reformed criminal that's easy to root for when compared to the other bad guy. And Calleia is good enough as that other bad guy, he's suitably ruthless and brutal. William Bendix, as a big man who administers beatings when ordered, is also pretty brutal, and there's a middle section that's surprisingly gruelling to watch thanks to his involvement. Lake is lovely, it's all too easy to see why a man would change his ways to try to be with her.

The script, by Jonathan Latimer, is very good, even if it falls just short of the greatness of the truly classic noirs. Ladd gets most of the best lines, but any exchange of dialogue between himself and Donlevy or Bendix ends up being quite enjoyable.

I'm not sure if this is a generally well-liked film, but I certainly liked it, a lot, and I hope that others will at least give it a watch, to see whether or not they agree. 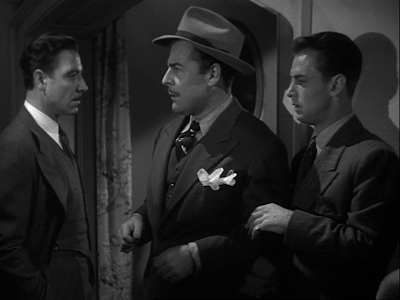