A blend of horror and noir, Angel Heart is a highly regarded movie, and with good reason. If you haven't seen it yet then get to it. If you have seen it, give it a rewatch and find out just how rewarding it is on repeat viewings.

The story sees detective Harry Angel (Mickey Rourke) hired by Louis Cyphre (Robert De Niro) to find a missing singer named Johnny Favorite. As Angel starts to make progress, tracking down those who knew Favorite and trying to find out more about his past in order to lead him to Favorite's whereabouts in the present, people start to turn up dead. The finger points to Angel in each instance, but with the growing danger comes a chance to spend some time with the gorgeous Epiphany Proudfoot (Lisa Bonet).

Directed by Alan Parker, who also adapted the book by William Hjortsberg into screenplay form, this is a film dripping with atmosphere and full of wonderful details throughout, both in the visual style and design, and also in much of the dialogue. It's a hot and sweaty movie, taking place mostly in New Orleans, a film that can almost make you smell the surroundings. It also builds and builds towards a third act full of real, impressive, horror and nastiness.

Rourke has, in my opinion, never been better (but I have yet to explore more of his movies from this time, so that opinion is subject to change). He's a permanently rumpled, doggedly determined, figure. A man who starts to suspect that he's being played for a schmuck, even as he keeps digging for answers. De Niro is a lot of fun in the role of Cyphre, charming and quietly menacing in almost all of his scenes. Lisa Bonet is sexy as hell in a role that couldn't be further removed from her sweet, wholesome turn in The Cosby Show. Charlotte Rampling is also very good, playing almost the polar opposite of Bonet's character. And there are also small, enjoyable turns from Brownie McGhee, Michael Higgins, Elizabeth Whitcraft and Pruitt Taylor Vince.

As shocking, at times, as it is entertaining, I rate Angel Heart as a near-perfect movie experience and a bit of a modern classic. There's nothing to fault in terms of the construction and technical side of things, and it's all topped off by a central performance that ranks as one of the very best. 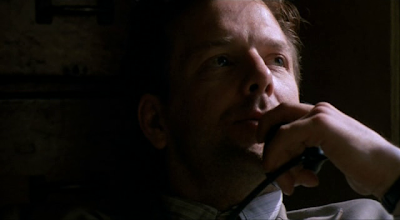