Written and directed by the hugely talented Wachowski siblings, Bound is a sleek and sexy neo-noir, perfectly cast and paced, and shot with the same eye for visuals that would develop further in their future hits.

Jennifer Tilly plays Violet, a frustrated and unhappy woman living with Caesar (Joe Pantoliano). Caesar is a small cog in the big machine that is the mob. He launders money, as well as doing some other odd jobs. It's enough to give them a decent life, but Violet wants out. She sees a chance to do that when she falls for Corky (Gina Gershon), an ex-con who has just moved into the apartment next door. As Violet and Corky spend some time developing a relationship, Violet discusses a plan that could leave them with everything they want. Caesar is holging just over $2M in the apartment in a suitcase. If that money was stolen, in a way that was made to look like it was done by Johnnie Marzzone (Christopher Meloni), then Caesar would just have to run. He hates Johnnie, but the man is the son of the big boss, Gino Marzzone (Richard C. Sarafian). But it's never quite that easy to get everything you want.

Although the script is decent enough, this is a movie that's all about the style and the characters onscreen. The plot isn't as twisty and turny as other neo-noirs, but there are enough moments of added tension to keep viewers interested until they get to the conclusion.

Tilly and Gershon are both excellent in their roles, very believable in their attraction to one another and both smart enough to deal with the many potential obstacles that may thwart their plan. Joe Pantoliano is his usual greatness, clearly enjoying how he gets to play Caesar, as a small fish pretending he's not in such a big pond. Meloni is an enjoyable asshole, and John P. Ryan easily commands respect as Micky Malnato, a fellow mobster who thinks highly of Violet.

The other big plus point for Bound is that it's damn sexy. Don't get me wrong, I'm not the type of guy to think any time two women kiss is a big turn on, but this movie starts to turn up the heat from the very first scene and keeps things at boiling point until about the halfway mark, where it goes down to a steady simmer.

Definitely one to watch if you haven't already, Bound is a great blend of elements that shows the potential that the Wachowskis would achieve just a few years later. 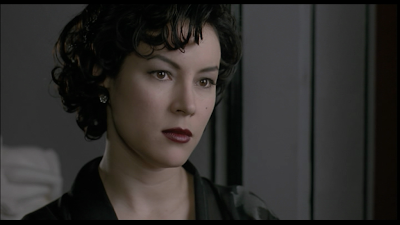