As hard-boiled as they come, Kiss Me Deadly is essential viewing for film noir fans, and proves to be an interesting and dark movie over half a century after it was first released.

Ralph Meeker plays Mike Hammer, a private detective who finds himself into something way over his head after he picks up a young woman named Christina (Cloris Leachman). Christina is very scared, and she's right to feel that way. Certain people aren't wanting her to live. Which means that, once Hammer is involved, certain people don't want him to live either. Despite a major attempt to put him in his grave, Hammer smells something BIG and sets out to get to the bottom of things, despite warnings from both allies and enemies.

Directed by Robert Aldrich, this is a film as archetypal and influential as it is twisted and strange. From the unique style of the opening credits to the very last shot, this is a slightly disorienting, slightly unnerving movie with a dark, dark heart. The script by A. I. Bezzerides, based on the book by Mickey Spillane, is a corker, full of snappy, cool dialogue while also dropping breadcrumbs that will lead everyone to a powerful finale.

The acting may not be so consistent, but there's plenty to enjoy. Meeker is great in the lead role, acting cold and selfish much of the time, keeping his emotions in check until people he truly cares for end up endangered. Leachman may not be onscreen for long, but she makes a great impression in her first cinema feature. Maxine Cooper, as Velda Wickman, has some more screentime, and makes an equally great impression as  Hammer's assistant who cares for him a great deal. And then there's Gaby Rodgers as Carver. Her acting isn't as good, she's a bit stilted when she's not overdoing the nervous and vulnerable schtick, but it somehow ends up being good enough come the end of the movie. Jack Elam is as memorable as ever as one of the henchmen who tussles with Hammer, and Paul Stewart and Albert Dekker round out the cast of villains.

Becoming much more than just the sum of its parts, Kiss Me Deadly is a thrilling detective story, unflinching at times and defiantly unafraid to show the many wrongs in the world and how they can't always be put right, even by someone with the best intentions and a whole lot of, perhaps foolhardy, courage. 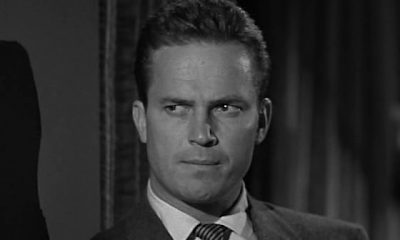