Based on a novel by James M. Cain, The Postman Always Rings Twice is a very enjoyable tale of love, hate, treachery and misfortune. It hits all of the beats that noir fans will expect, but it does so in a way that's enjoyably different from the other movies of the era.

John Garfield stars as Frank Chambers, a man with a bad case of itchy feet. He is finally persuaded to settle down when offered a job by the kindly Nick Smith (Cecil Kellaway). It's not Nick's kindness that persuades him, however, it's the beauty of Nick's wife, Cora (Lana Turner). The two don't immediately get along, but when the cool lady starts to warm up to Frank it becomes clear that the husband will have go go.

The screenplay here, by Niven Busch and Harry Ruskin, isn't the sharpest, with only a few barbed exchanges sticking in the memory, but the direction from Tay Garnett is good enough and the cast is, well, it's a mixed bag, but with plenty of treats.

Garfield is one of the weaker leads, but Turner is much more memorable as Cora. Like every other aspect of the movie, she's not the best archetype seen in the subgenre, but she's one of the best onscreen. Kellaway is very good as Nick, a very kindly soul, oblivious to plans being made for him. Hume Cronyn and Leon Ames are both great as legal eagles on opposing sides.

Although the events unfold onscreen in a fairly unpredictable manner - with most of the developments signposted in advance for eagle-eyed viewers - it must be said that the bigger twists are a bit out of left field, and enjoyably so. The whole final act, in particular, is a fun attempt to repeatedly blindside the viewer, though most of the events that occur do so with at least a little foreshadowing to help people expect the unexpected.

Well worth a watch, but it never quite reaches greatness, in my opinion. 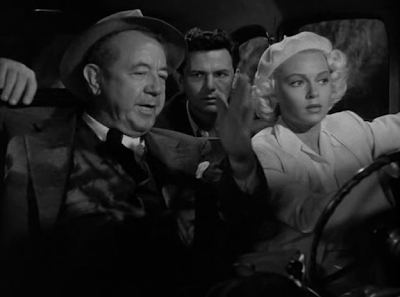