"My guess might be excellent or it might be crummy, but Mrs. Spade didn't raise any children dippy enough to make guesses in front of a district attorney, and an assistant district attorney and a stenographer."

That is just one of the many gems that will tickle your ears as you watch The Maltese Falcon, another of those classic movies that you watch and quickly realise just how deserving of its status it is.

Humphrey Bogart stars as detective Sam Spade, a man dragged into quite a sticky situation by the titular item of great value. Well, he is first dragged into the situation by a young, nervous woman (Mary Astor). After the death of his partner and another man, Spade is made to feel some pressure from local police. Then it's the turn of a man named Joe Cairo (Peter Lorre). And last, but not least, Kasper Gutman (Sydney Greenstreet) and his right hand man (Wilmer, played by Elisha Cook Jr.) show just how much they want their hands on the artefact.

Directed by John Huston, who also wrote the screenplay (based on the novel by Dashiell Hammett), this is one of the best directorial debuts I can think of. Of course, Huston had been writing films for over a decade, so he certainly gave himself the best start possible by creating such a great script, but there's something else that makes this so completely and utterly brilliant. The cast are all great, and the camerawork is great, but the different aspects of the film come together to be more than just the sum of their parts. It's pure movie magic.

Bogart is, in case you didn't already know, brilliant in the lead role, and he's surrounded by such a wonderful variety of people doing some of their best work. Astor is very good, but her character impacts the events more offscreen than on. Peter Lorre is someone I will forever be a fan of, and this is yet another great turn from him, while Greenstreet and Cook Jr. both do great in two very different roles, with the former being polite and eloquent while the latter would rather use his gun, if given the chance. And then there's Lee Patrick, adding to the many pleasures that this movie has to offer as Effie, Sam Spade's secretary and, potentially, the most reliable person in the entire movie.

If you haven't seen The Maltese Falcon by now then do so immediately. With that script, that cast, the most famous MacGuffin since "Rosebud" and everything else coming together so perfectly, this is essential viewing for cineastes. 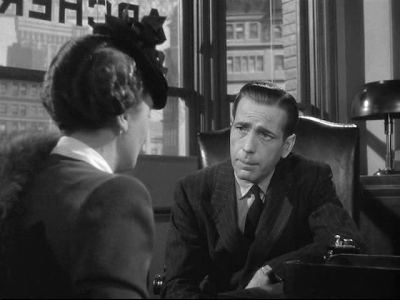