Fred MacMurray plays insurance salesman Walter Neff in this classic film noir from director Billy Wilder (who co-wrote the screenplay with Raymond Chandler, based on the book by James M. Cain). Neff is a good guy. He's a great salesman and also a colleague that claims investigator Barton Keyes (Edward G. Robinson) can depend on. That all changes, however, on the day that he meets Phyllis Dietrichson (Barbara Stanwyck). He's only visiting to get her husband (Tom Powers) to renew his automobile insurance policy, but Phyllis soon starts guiding the conversation towards life insurance and a policy she could get for her husband that would guarantee a big payout if, god forbid, anything ever happened to him.

Highly influential in all the right ways, Double Indemnity holds up today as a great slice of entertainment and a quintessential film noir. It was far from the first movie in that subgenre, but it's one that remains an almost perfect example containing many of the tropes and showing how to perfectly piece them together.

The one MINOR criticism I have is that the dialogue, so cool and great to listen to, quickly becomes a bit too unnatural. Mind you, after listening to an exchange like the entire first meeting between Walter and Phyllis, the many hits are worth the few misses. It's worth noting that, although it seems I am contradicting myself, at least 90% of the script is a joy to tickle and caress the earlobes.

MacMurray and Robinson are superb in their roles, with the former somehow managing to stay sympathetic and likable even as events take a turn for the worse, but this movie belongs to Stanwyck, who grabs her role with both hands and delivers a performance that film-makers have rightly remembered and tried to emulate ever since. There's also a lovely performance from Jean Heather, playing Stanwyck's stepdaughter, never warming to the woman with good reason.

Billy Wilder gave cineastes a number of classics throughout his career. This is one of them. The voiceover narration, the plot twists, the details teased out in the conversations, the performances, the secondary characters who get to make almost as much of an impression as the leads. I almost gave this 10/10, and many will argue that I should have, but that's the joy of us all having different opinions. 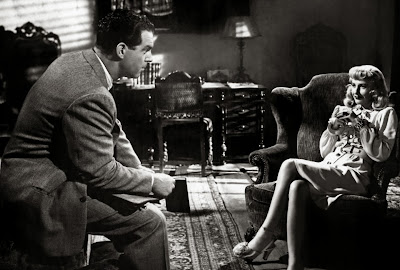