Constantine. He's a character who hasn't really been given the best treatment, if you ask fans. I am one of the people who actually enjoy the Keanu Reeves movie but I can see why the changes made ended up upsetting those who had waited patiently for the character to get the big-screen treatment. And then there was the short-lived series with Matt Ryan in the main role, an actor who seemed to be right for the part but couldn't do enough to boost the ratings for the show, which was cancelled after one season. Ryan reprises the role here, in voice form (as he did in Justice League Dark), and his attitude and fit for the character remain a big plus, which should please most people.

Here's the plot anyway. John Constantine (Ryan) is asked by a good friend, Chas (Damian O'Hara), to help out when his daughter falls into a coma. This leads to the two men travelling from London to Los Angeles, finding out that a powerful demon there may want to negotiate a deal for the soul of the comatose little girl, and also recollecting a traumatic incident that happened some time ago in Newcastle. Will Constantine's past come back to bite him on the rear, or does he have enough tricks up his sleeves to ensure another victory against evil forces?

Based on an animated series that first appeared online, five short episodes, this is another enjoyable bit of entertainment from the animation branch of the DC movie universe.

Director Doug Murphy does a fine job, working from a script by J. M. DeMatteis that pitches things perfectly between sheer fun and little gags and grace notes that remind you that this isn't a cartoon aimed at children. It's not exactly a Legend Of The Overfiend kind of film but you get a decent layer of darkness and a couple of moments of sexual chemistry. The animation isn't quite as good as the work I have seen in other DC titles, but that is easier to forgive as the story zips along from one enjoyable beat to the next.

Ryan and O'Hara are very good in their main roles, with Ryan equally at ease conveying the pain of his character or delivering fun lines about how he cannot just magic enemies away because he isn't Benedict Cumberbatch, and the rest of the cast all slip well into their (often multiple) roles.

Having never read any of the source material, I only know the character of John Constantine from his appearances onscreen. I still like Keanu's performance, despite the main differences from page to screen, but fans should find more to please them in the animated adventures. I hope we get some more, and I also hope to have seen the live-action TV show by then. 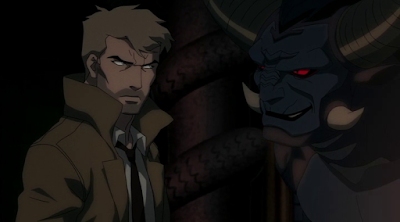