Megan Fox and Amanda Seyfried star in this hip comedy horror directed by Karyn Kusama from a script by Diablo "writer of Juno" Cody. I think every review of this movie has to mention the fact that Diablo "writer of Juno" Cody was the writer of Juno. This fact may help people decide whether they are going to like or dislike Jennifer's Body because it certainly contains a lot of the highly stylised teenspeak that Diablo peppered throughout her most famous script (to date, anyway).

The plot sees Jennifer (Fox) and her unlikely, and slightly geeky, best friend Needy (Seyfried) attending a rock gig featuring a band with a lead singer (Adam Brody) that Jennifer would like to get to know a lot better. But when a fire burns down the venue things go speedily downhill and Needy simply looks on as Jennifer is taken away in the rock group's van to who knows where. The next day it seems that all is well, weirdly so, but something is different about Jennifer - she's now possessed and likes to terrorise and eat her fellow schoolmates. This causes some understandable friction between the two pals, and as the rift widens it's Needy who starts to uncover the truth behind the recent spate of deaths in town.

A lot of people have had the knives out already due to the lead role being played here by Megan Fox, an attractive girl most associated with the large battling robots of the Transformers movies. But it's with performances like this one and her turn in How To Lose Friends And Alienate People that she proves she's more than just a pretty face. Seyfried is a great asset as the best friend who has to face some difficult decisions and none of the other young actors let themselves down in any way. There really aren't too many older stars given much time but J.K. Simmons stands out in his small, fun role.

Stylistically, the movie reminded me very much of Heathers and also Mean Girls in its skewing of high school hierarchy and the twisting of the stereotypical teen roles. As mentioned before, those who do not like the kind of teenspeak used in Juno, etc. may find the whole thing a bit jarring to the ears but the blend of scares, tension and smart one-liners (my personal favourite being a great "Rocky Horror" gag) should please those who dig the movie's overall vibe. 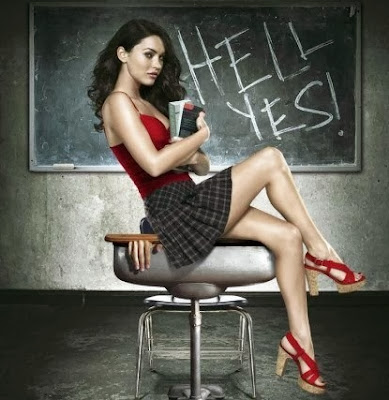