Here we go again. With no disrespect intended to anyone involved, Bridget Jones's Baby is a sequel that feels like you have to see it out of a sense of obligation, as opposed to it being something you were really waiting on for years. It's much like the second film, which was a pale imitation of the first film, and that is both a positive and negative.

In case you couldn't tell from the vague title, Bridget Jones (Renée Zellweger again, of course) finds herself pregnant. It usually takes two to tango but Bridget, as different as ever, has decided to complicate matters. The baby may have been fathered by Mark (Colin Firth again) OR a handsome American chap named Jack (Patrick Dempsey). Deciding not to tell either man about her lack of certainty, Bridget goes through her pregnancy while trying to keep her secret. Thankfully, she has a very accommodating doctor (Emma Thompson) willing to help her. But the truth will need to come out eventually. I know what viewers will be hoping to see happen by the time the end credits roll, but is that the kind of happy ending that Bridget can get?

Look, I've reviewed the first and second movie already, so the easiest thing to do here would be to copy bits from those reviews and place them here. The main characters of Bridget and Mark are essentially the same, just a bit older, and the comedy generally works, even during the times when it seems that Bridget is about to crumble under the weight of her situation.

Director Sharon Maguire, who helmed the first film, returns, and she has a better feel for the tone and characters than Beeban Kidron seemed to in the previous outing. It helps that she's working from a better script too, this time Helen Fielding and Dan Mazer are joined in the writing department by Thompson (which MAY help to explain why she almost steals the show with her few scenes but, then again, Thompson is just always that good). There aren't too many moments that are outright hilarious but there are plenty of little chuckles supplied in between the few bigger laughs.

Zellweger and Firth know their characters very well, and have always felt like perfect casting in those roles, so they slip back into things with ease. Dempsey is a great addition, considerate and caring and seemingly perfect in a way that very much irritates Firth's character, and I just mentioned Thompson almost stealing the show. The rest of the cast crop up for moments that show their characters are still around, Hugh Grant aside, so you once again get to see Gemma Jones, Jim Broadbent, Sally Phillips, Shirley Henderson, James Callis, Jessica Hynes, Neil Pearson, Joanna Scanlan, and a few other familiar faces.

Still not as good as the first movie, this is a slight step up from the second film and at least provides a better ending to the Bridget Jones saga, as far as I'm concerned. I hope they can now leave these characters were they are. But I know I'll end up watching the next movie if they decide to make another one.

You can buy the boxset here.
Americans can buy it here. 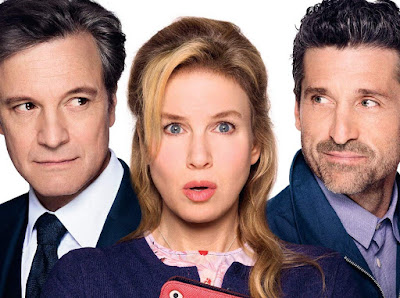