Taking a true event as its starting point, Lake Bodom is a decent, twisty, horror movie that has the misfortune of coming out at a time when the way things play out already feels slightly overdone, although there are usually different motivations for it in other movies. It also doesn't help that it makes a couple of choices that are, quite frankly, odd.

A quartet of teens, two boys and two girls,  go camping out at Lake Bodom, an area that was the site for some vicious murders back in 1960, with those involved being, yep, two teenage boys and two teenage girls. While the main characters settle in for their ghoulish night, you get the usual mix of platonic moments, awkward flirtiness, and attempts to create scares.

Nelly Hirst-Gee and Mimosa Willamo are Ida-Maria and Nora, the two female members of the party, and both do good work in their roles. Mikael Gabriel and Santeri Helinheimo Mäntylä are Elias and Atte, the two boys who think they will have a fun time before being rudely alerted to the fact that it maybe isn't such a good idea to fool around at an infamous murder site. They're also good, although working with characters that are give less depth than their female counterparts.

Directed by Taneli Mustonen, who co-wrote the screenplay with Aleksi Hyvärinen, Lake Bodom isn't a terrible film, by any means. Nor would I say it is one that is completely predictable from start to finish. Unfortunately, once it starts to develop a couple of the main plot points it then becomes easy to see where everything is headed, making what should be an enjoyable and thrilling second half into nothing more than a decent waste of time until you get to the inevitable ending.

This feels like a movie planned around a couple of twists and one main set-piece, with the rest of the runtime simply padding things out. The twists are okay, if obvious enough from the moment the spring starts to coil (as it were), but, fortunately for the makers of the film and the viewers,  the main set-piece is pretty great. Enough to lift this above average.

As for those odd choices I mentioned in the first paragraph. First of all, character motivation is not what it should be, not by half. Considering what happens in the second half of the movie, the reveal of previous developments, shown in flashback, doesn't really make anything seem plausible. Secondly, the use of the real-life murders as a springboard for events seems to be a completely unnecessary (and some might say tasteless) detail. Although it may resonate more with the people of Finland, where this is set, would it really have been so difficult to take any location, create a fictional unsolved murder case, and let the plot unfold in the same way? No, it wouldn't. There MAY be another reason for it, beyond the name recognition, and the case has been directly cited in at least one other horror movie (Bodom, 2014) and influenced at least one extreme metal band (Children Of Bodom), but I can't think of anything beyond the cynical and obvious.

Everything works, at least on the surface. It's just a shame that there's nothing more to it when you dig a little deeper. 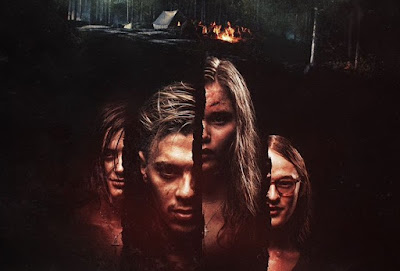