Apparently this Indonesian horror is a bit of a remake/prequel to a 1980 film, which I haven't seen, but you may be happy to hear that it's absolutely fine to watch as a standalone film. I did read up on the final scene, which didn't make much sense to me, but my ignorance wasn't enough to spoil my viewing experience.

Rini (Tara Basro) is the family member who spends most of her time with her mother, who is very ill. She rings a bell when she needs assistance, and spends most of her time prone in her bed. And then her mother dies, which is when things go from quite scary to pretty terrifying. Having already been weirded out by a couple of creepy incidents, Rini and her brothers start to see figures appearing in various places around them, either spirits or physical manifestations of the undead, and they eventually figure out that there is some evil force trying to get hold of the youngest of the children (Ian, played by Muhammad Adhiyat) because of a deal made with a Satanic sect.

This is a horror film that has the best of both world for fans of the genre. You get the jumps and scares similar to those recently packaged in popular hits by James Wan and you also get a near-constant sense of unease and dread. The creepier moments, and the imagery, are reminiscent of the best stuff we discovered during the Asian horror boom at the turn of the 21st century.

Director Joko Anwar, who also gave us the very good Ritual (2012), does a fantastic job here, working from his own script to perfectly set up the details and geography that will pay off later in the movie. The bell that is rung by the "patient", the water well, even the set up of the bedrooms, showing where people sleep in a shared room and where they sleep alone. Windows and reflective surfaces often show viewers more than the characters notice, and there are a couple of standout scenes that involve white linen being inhabited by figures that nobody would want there.

The cast all do solid work. Basro is the nominal lead, but she shares a lot of the screentime with Adhiyat, Endy Arfian (as her brother, Tony), and Nasar Anuz (as her other brother, Bondi), and there are worthwhile contributions from Bront Palarae (the father), Arswendi Nasution (a man who may have knowledge of the situation), Dimas Aditya (the son of Nasution's character), and Elly D. Luthan (grandmother). Everybody fits perfectly in the role they're given, and their personalities and relationships make everything easier to accept as things go very quickly from the mundane to the completely mad.

If you want something that will deliver some straightforward genre thrills then this is a great choice for you. Thankfully, it also has a little bit more to it, in the way it develops the backstory and crafts something that could lead on to even more horrors in the future (I would much rather see more films spun off from this than I would see more films spun off from The Conjuring movies). It's highly recommended, and I'll be going back to check out the original inspiration whenever I get the opportunity.

No links for this, so please just go to Amazon.co.uk and buy stuff.
Or Amazon.com. 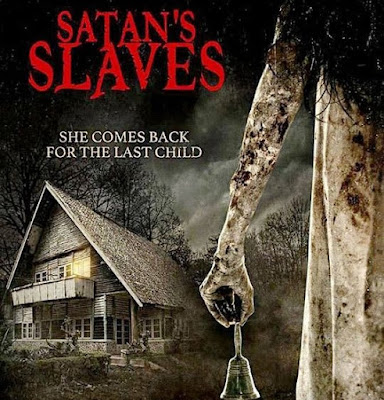