I've said it before, as have many other people, and I will say it again. The worst thing that a movie can do is to leave you feeling absolutely nothing. The ones that just exist, you watch them, you wonder what else you could have done during that time, and you hope to never have to watch them again. Slender Man is one of those movies. I can't give it the lowest possible rating, mainly due to the fact that it has a degree of technical competence and acting ability that the worst films end up lacking, but I don't want anyone thinking that this comes even close to being any good.

The very basic plot sees a group of friends discussing the modern urban legend that is the Slender Man and then working together to summon him, for no other reason than shits and giggles (this is no Candyman). Their plan works, they start to disappear one by one, and it's then a race to figure out how to get him to go away and leave them alone.

As far as I can tell, the Slender Man was created in stories on the internet about a decade ago, by someone named Eric Knudsen AKA Victor Surge, and the creation snowballed and grew into something impressively convincing and developed. My own experience with the character happened when I started to dig into the online series, Marble Hornets (look it up on YouTube, it's highly recommended), and I have been aware of his "brand" growing over the years, in videogames, movies, and as the figure at the centre of a number of crimes and media-crafted tales of fear and panic.

His presence, and the way it has developed from those early days, makes this movie all the more disappointing. What we have here is a bland, safe, mess of a film that tries to make use of the character without ever capturing the real sense of creepiness you can find in most of the tales.

The cast all do what is asked of them, without being memorable or interesting. Joey King, Julia Goldani Telles, Jaz Sinclair, and Annalise Basso are the four main girls involved, Taylor Richardson is a younger fifth character who may get dragged into proceedings, and Alex Fitzalan plays one of the few male characters, and is so redundant that he may as well not be onscreen at all. Nobody stinks. They just can't work well enough to make up for the drab, familiar, aesthetic that is used for the nightmare imagery and scares.

Director Sylvain White has spent the past decade doing mostly TV work (his last feature was The Losers) and this doesn't look likely to lead to an increase in demand for him to try creating more cinematic outings. Although the script by David Birke is about as middling and horribly predictable as you can get, White does nothing to help, instead content to work with imagery and scene construction that feels as if it could have easily been cut and pasted from dozens of other teen horror movies from the past decade.

Do yourself a favour, skip this movie and instead spend 90 minutes browsing the internet for the early tales and videos that brought the Slender Man to the attention of the masses. You'll find a lot of that stuff much scarier. 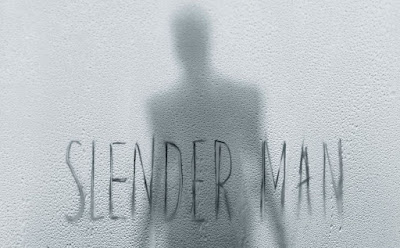