The first English language film from director Zhang Yimou, who has given us some absolutely gorgeous films in the past few decades, The Great Wall is a film that I think I can best sum up as being, well, one I never worked up the enthusiasm to watch. I didn't want to see it in the cinema, I didn't pick up the shiny disc until I saw it in a sale selection one day, and I didn't watch it until now. And, here's the thing, my lack of enthusiasm seems to have been warranted.

The story sees a couple of European Mercenaries (played by Matt Damon and Pedro Pascal) encountering a monster while they rest en route to the Great Wall. Once at their destination, they are looking to somehow get their hands on a load of gunpowder stored there, they are taken prisoner. While trussed up and helpless, they witness the wall being attacked by a horde of monsters. Managing to get free and join in with the vigorous defence of the wall, the two men are then made to feel more welcome. They learn the story of the monsters, they help to figure out a plan to potentially defeat them, and they may find themselves being rewarded with much more than just gunpowder. If they can resist the urge to steal and flee.

There are enough separate elements that work here to make The Great Wall an enjoyable enough piece of entertainment. The acting is generally okay (although it's a rather weak turn from Damon, who seems as puzzled as most viewers as to why he should be the lead), the special effects do what is needed, the story is a fun creature feature that makes good use of one of the most famous structures on the planet, and there are sequences that contain such colour and grace that remind you Zhang Yimou is sitting behind the camera.

Sadly, it's never as good as it could be. Compared to other monster movies, or action movies, or even the past highlights from Yimou, this is just okay. And just being okay can be okay, but it's disappointing when it comes from a director with this eye, and this much talent.

The screenplay, by Carlo Bernard, Doug Miro, and Tony Gilroy, never does enough to underline the points it is making about culture and order, about the nobility of the sacrifices being made by The Nameless Order, those tasked with protecting the wall from the attacks of the monsters. You get some decent exchanges between the main characters, but they're like gasps of breath in between crashing waves of muddy water. None of the characters feel as developed as they could be, and every relationship dynamic feels unearned and simply there to tick off the checklist that the film is working through.

Damon, as already mentioned, seems a bit out of place here, in more ways than one, and it's not one of his better performances. Pascal fares better, helped by the fact that his character is set up in a way that doesn't require him to go through any major transformation. Jing Tian and Andy Lau are both very good in their roles, even if they are working with material that feels slightly beneath them (not in terms of the standard content, I mean in terms of the way their characters are sketched/treated). Willem Dafoe is the other name worth mentioning, although he also suffers at the hands of the script.

It's always hard when foreign directors transition from working in their own language to working on an English language production, and it's good to see the sequences here that Yimou uses to indulge in his usual mix of bright colours and grace, but this isn't anywhere near the disaster it could have been. It's a mediocre movie with a couple of standout set-pieces that make it worth your time. Or you could just pick one of the better, subtitled, movies that Yimou has directed in the past. Hero, House Of Flying Daggers, and Curse Of The Golden Flower are all good choices to start with. 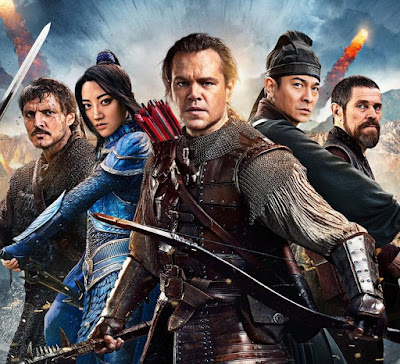