Perhaps not deliberately, considering what it took to get the thing made, Kolobos is an odd little horror movie that made a big impression on me at the end of the 1990s because it was different from so many other movies of that time. Right in between the surge of Scream imitators and the super-spooky ghost tales that would prove to be such massive box office hits, not to mention the deluge of "J-horrors" that a lot of fans were about to be turned on to.

And discussing it fully is to spoil some of the treats that it had in store so I am going to try to be slightly vague, even as I attempt to convince others to watch it. Is it a masterpiece? No. Some of the elements, such as the poor acting from almost all of the cast members, make it very difficult to fully embrace. But it tries hard to be a unique and intense horror, and there are times when it succeeds.

The plot, or at least the most basic part of it that I will share here, sees a group of young people (Amy Weber being the nominal lead, Kyra) taking up the offer to share some time together in a house while they are filmed as part of an experiment. But what they signed up for and what happens in the house are two very different things.

Written and directed by Daniel Liatowitsch and David Todd Ocvirk (with assistance from Nne Ebong in the screenplay department), Kolobos is a psychological horror movie that also doesn't forget to deliver the visceral goods every so often (one of the death scenes here holds up as a gruesome favourite of mine). It's a look at a fractured mind, it's an early mix of horror a scenario that feels very much like the standard reality TV set-up for modern audiences, and it's a love letter to Argento that manages to blend many influences together while still feeling fairly fresh and unique.

The cast are, sadly, a bunch of duds. There's no point in sugar-coating that particular pill. They can't do anything to improve the weak script (weak in terms of actual dialogue, not the ideas being played around with) and are just far too unappealing. But they're also all ultimately unimportant, with all deaths being about the method rather than the motive or consequences. The film gets better, in my opinion, as logic starts to dwindle and a sense of madness really comes to the fore, although I am sure others may feel quite the opposite.

Padded out with some extra scenes that were required to get it released as an actual feature, and you can tell, Kolobos is a scrappy, low-budget horror that should please fans after something a bit different, as long as you can overlook the weaker aspects of it. If you can tolerate the dialogue and acting then you're rewarded with some great set-pieces, some amusing clips of a fictional film within the film, and that impressive score by William Kidd. All thrown together in a feature that admirably blends Deep Red with My Little Eye (a couple of years before that film came along). 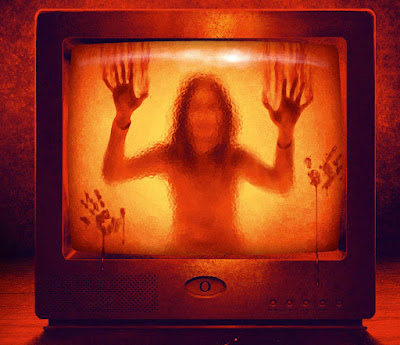