Not content with upsetting people who took a dislike to his output in the music industry, Crispian Mills (son of Hayley, frontman for Kula Shaker, who I actually really enjoyed) seems intent nowadays to equally upset people who dislike his output in the movie industry. This is his second feature, both with Simon Pegg in a lead role, and I can only say that, judging from this one alone, Mills is a much better musician than he is a director.

The plot of Slaughterhouse Rulez is quite a simple one. You have a new boy (Don Wallace, played by Finn Cole) trying to fit in at a posh public school. He finds a friend (Willoughby Blake, played by Asa Butterfield), finds a girl that he immediately starts pining for (Clemsie Lawrence, played by Hermione Corfield), and finds himself incurring the wrath of a bully (Clegg, played by Tom Rhys Harries). And this all coincides with trouble at a nearby fracking site that has unleashed some dangerous beasties.

The cast don't do a bad job. Everyone mentioned fits nicely in their roles, even if those roles are quite thin stereotypes to help this feel very much like an old comic tale brought to life onscreen. As well as those mentioned, you get Simon Pegg as a teacher, Nick Frost as an environmental activist, Michael Sheen as the headmaster, and very small roles for Jo Hartley and Margot Robbie, as well as a number of lesser-known actors doing their bit to add to the fun.

Look, you can't see a film like Slaughterhouse Rulez and call it one of the worst things ever made, you just can't. It has a degree of technical competency that is achievable for people who can get a decent budget in place (no blockbuster money but certainly not at the lowest end of the indie scale), it has fleeting moments that hint at how much better it could have been, and it has a delightful performance from Sheen.

You can, however, see this and be massively disappointed. In much the same way that 101 different British crime caper movies came along after the success of Guy Ritchie, a horde of British movies have all tried to capitalise on the success of Edgar Wright, some of them doing so by blending horror elements with some particularly British comedy stylings, and some doing so by trying to get Simon Pegg and/or Nick Frost involved. This does both, allowing it to be doubly disappointing.

Mills must take most of the blame. He directed. And, with Henry Fitzherbert, he also co-wrote the script. The pacing is off, without any decent set-pieces to make things move along quicker, the supporting characters aren't interesting or well-developed enough to make the time spent with them worthwhile, and, worst of all, very few of the jokes land. The monster moments work, but are too infrequent, which leaves the whole thing feeling like a wasted opportunity, especially considering the cast assembled.

You can buy the movie here.
Americans can buy the same disc here.
Or you can just click on the links and buy whatever you like. 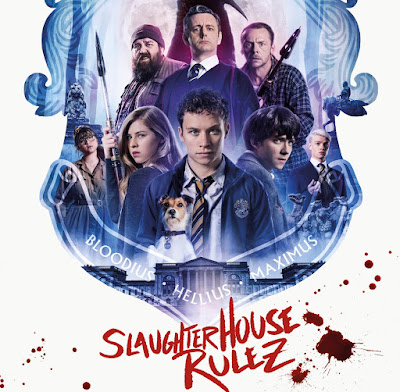