I have no idea what movie I saw, and so disliked, some years ago but it seems that it wasn't this one. Or, if it was, I was in some kind of terrible mood that completely clouded my judgement. Because Johnny English Reborn made me laugh a lot. It's silly, it's predictable (seriously, if you cannot spot the main villain as soon as they appear then I'll be amazed), and it's superior to the first outing in a few key ways.

Atkinson returns to play the main character, a man we last saw basking in the glow of success. That glow has long faded, after an incident in Mozambique that was so bad that he even had his knighthood removed, and he has spent a long time training with Tibetan monks. But an opportunity for redemption awaits when he is requested back by MI7. There's a plot brewing to kill the Chinese Premier and the main lead will only talk to English. Partnered up with a young man named Tucker (Daniel Kaluuya) and armed with the latest gadgets, English is determined to foil the plot. And he's a lot more skilled than he used to be.

There's a level of polish and ambition here that was missing from the first film, although I think it may have been possible here as a direct result of that film's success. And it also does a great job of delivering what audiences want more of while not simply rehashing all of the previous highlights.

Director Oliver Parker oversees everything with a sense of confidence and style, working with a great script from Hamish McCool that, sensibly, makes the main character a much better agent than he used to be, although he still lacks essential knowledge and social skills while remaining oblivious to his own failings. Rather than just derive laughs from the ineptitude and clumsiness of English, McCool gives the character a different flavour. He's an agent who now compensates for his failings with new techniques and tricks.

Atkinson has just as much fun in his role, perhaps even more so with the moments that allow him to look a lot cooler than he ever has before (a chase sequence in which he relentlessly, but sedately, strides along after a daredevil practitioner of parkour is a highlight in the first half that best rings the changes), and the supporting cast is even stronger than it was for his last spy adventure. Kaluuya is as likeable as ever in his role, Gillian Anderson is the weary boss, Dominic West is the standard British agent in the mould that we're all more familiar with, and Rosamund Pike is a behavioural psychologist who obviously finds herself fascinated by English, and you also get small roles for Stephen Campbell Moore, Richard Schiff, Tim McInnerny, and Pik Sen Lim (as a deadly assassin).

If you enjoyed the first film then you're likely to enjoy this. There's even a chance that, like me, you enjoy this one even more. And I'm looking forward to checking out the next instalment.

Here's a triple-pack for you.
Americans can buy the same set here. 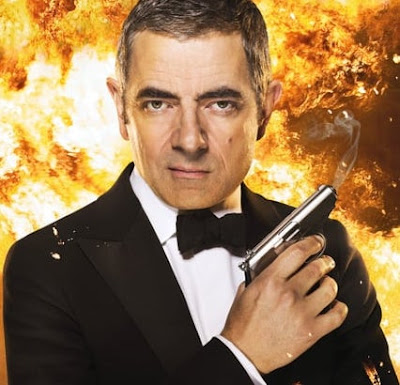