Well, this is a hell of a wild ride. Night Train To Terror is an anthology movie that stitches together parts of some other movies (one unfinished) and frames them with a tale of God (Ferdy Mayne) and Satan (Tony Giorgio) having a philosophical debate while travelling on a train that also features a groovy group of dancers who keep gyrating around while a lead singer keeps repeating the same song.

There are three stories here. Story one shows an insane asylum that seems a lot more interested in mutilation and murder than curing anyone. Story one is also the hardest one to get through, but more on that later. Story two is about a man who ends up in a club that enjoys playing deadly games. Everything is set up so that one person in the group should always die, with methods ranging from electrocution to deadly insect. Last, but not least, we have a tale about a servant of Satan and the people out to stop him.

Due to the way this movie was assembled, there are a number of different directors involved here (which can be the case with anthology horror movies anyway). John Carr is the man behind the first two segments, while Philip Marshak, Tom McGowan, and Gregg G. Tallas are responsible for the third tale. The framing device was filmed by Jay Schlossberg-Cohen, and the screenplay is credited to Philip Jordan, the man responsible for writing the movies that were edited together to make this.

Like any anthology, there are good and bad sections here. The first tale is just too random and bonkers to be as effective as it could be, although you get to enjoy a performance from John Phillip Law that sees him permanently confused by the events around him, as well as a menacing turn from Richard Moll, playing a sadistic orderly. The second is the strongest, despite the silly moments throughout, lifted slightly by the presence of the lovely Meredith Haze in the role of Gretta, the woman who starts the main male character on his journey through these death challenges. Although the final segment is, unbelievably, even less coherent than the first, it throws in some better imagery, has decent performances from Faith Clift and Robert Bristol (the latter being the Satanic helper), and also lets Richard Moll back onscreen, playing a very different character from the one he played in the first tale.

I wasn't enjoying Night Train To Terror, feeling that it was a slog throughout the first 15-20 minutes, and then it started to win me over. Maybe it was the lengths it would go to in order to line up the shocks and bloodshed, maybe it was the attempts to sandwich some debate on good and evil in between the tales, maybe it was just that bloody song, that gets repeated again and again, and turns into quite the earworm by the time the end credits roll.

Sometimes you want movies that comment on the world around us, sometimes you want slick thrills and chills, and sometimes you can be entertained enough by something that is just complete nonsense, lacking any logic or attempt to stay within spitting distance of a sense of reality. Night Train To Terror is a film for those times.

Americans can get a decent disc here. 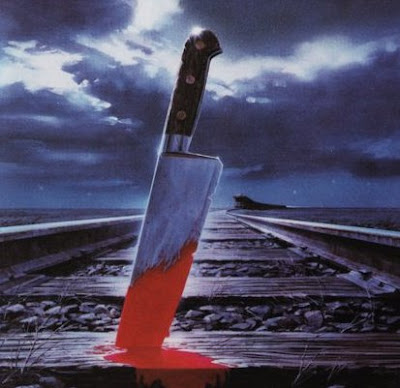