It's interesting to watch The Blind Side today, probably more interesting than it would have been watching it when first released, for the way in which it already feels quite archaic and cringe-inducing. A decade later we have conversations whirling around daily about representation, we've had the attempt to remind police of their bias with the Black Lives Matter, and there has been a notable progression, even if it is in the tiniest of increments. The fact that The Blind Side is based on a true story doesn't mean you can watch it without considering everything that has happened since. I'll be reviewing it for what it is, as I try to do with every movie, but I felt it was worth pointing this out at the start. You can view and enjoy this for the standard drama, with a hefty serving of sports, that it is, and you can also springboard from it into some very interesting thoughts and conversations about what has, and hasn't, changed in the previous decade.

Quinton Aaron plays Michael Oher, a large African American lad who gets a chance to join a fairly prestigious school when the American Football coach (Ray McKinnon) considers what an asset he could be to the school team. Unfortunately, Michael doesn't look like he will be there for long. His grades aren't good and he has to spend his nights seeking somewhere warm to sleep, due to his being made homeless. But an encounter with the Tuohy family starts him on a path that may give him the time and opportunity to make a much better life for himself.

Writer-director John Lee Hancock has done well for himself with a selection of celebrated films adapted from true stories (including Saving Mr. Banks and The Founder, as well as this one). Here he adapts the book by Michael Lewis, fudging some facts and character traits to create more cinematic elements for the main characters to contend with, and he does everything with a degree of polish and competence that guarantees most viewers who watch without being too cynical will at least enjoy watching the story unfold. It's very predictable, and makes a lot of very safe choices, but it's still a good watch, the kind of glossy cinematic comfort food that makes for a decent choice on family movie night.

Aaron is very good in his role, a gentle giant who has his intelligence hidden behind his timid demeanour, ready to fulfil his potential if someone can engage him in the right way. Sandra Bullock is enjoyably over the top as Leigh Anne Tuohy, a woman who is used to getting her way and doesn't care about the opinions of others. It's an over the top performance, and one that bagged her an Oscar for reasons that are beyond me, but there's no denying that she has fun with it. Tim McGraw plays her husband, and the children are played by Lily Collins and a scene-stealing Jae Head (the youngest family member). Everyone does good work. McKinnon is fun in the coach role, not knowing how to deal with his new player until Mrs Tuohy puts him right, and Kathy Bates does just fine as a tutor who is hired to help Michael get his grades up, because failing academically will scupper any prospects he may have to develop his American Football career.

Just as easy to hate as it is to enjoy, The Blind Side is simply out to tell a story that engages and entertains viewers, and maybe moves them on occasion (if you're unmoved then it's not for the lack of attempted manipulation by Hancock). I ended up really liking it, mainly thanks to the central performances from Aaron and Bullock, and I recommend it to others, even if, despite the title, there's not much that happens that you don't see coming from the very beginning.

You can buy the movie here.
Americans can get the same disc here. 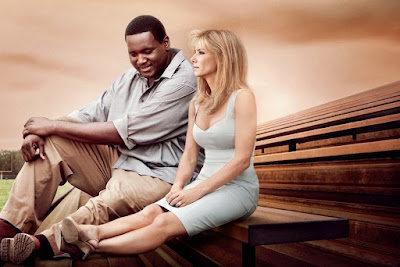