Movies come from many places. Original ideas (don't laugh, this does still happen occasionally, it's just not the source for 95% of the big names you'll see advertised at your local multiplex), TV spin-offs, tales springboarding from real events, and reworked board games. But very few other movies, if any, have been developed after a successful series of adverts. Beginning his life in a series of Barclaycard adverts, Johnny English (Rowan Atkinson) was a comedic riff on the James Bond character. Never that savvy, pretty hopeless with the gadgets, and yet still trying to give off that image of unflappable cool, he was the kind of character that it would make sense to create a movie around.

The plot sees every other MI7 agent in the land killed during the funeral of one top agent (who died because of misinformation given to him by English). With nobody else available, English is tasked with keeping an event secure that will focus on a display of the Crown Jewels in the Tower Of London. Those jewels are stolen, which takes English on a journey that will lead him and his partner (Angus Bough, played by Ben Miller) on a collision course with Pascal Edward Sauvage (John Malkovich), a Frenchman who has been celebrated for a series of "superprisons".

Since making his feature debut with Sliding Doors, director Peter Howitt was, for the first few movies that had him in the big chair, a fairly safe pair of hands. None of his films were particularly memorable, but most of them did exactly what they were supposed to do. Johnny English sits perfectly among those titles.

What you have is a script by Neal Purvis, Robert Wade, and William Davies that feels incredibly light, focusing on a number of plot points while leaving a few spaces here and there in which Atkinson can do the kind of physical comedy that he does so well. It hits all of the required Bond-isms, not surprising as Purvis and Wade have been working on that franchise for the past twenty years, but doesn't do quite enough to make the comedic set-pieces as funny as they could be.

That's all pretty much left to Atkinson, who is good, but never great. Constrained by the suit he has to wear, Atkinson is left to bumble around like an inferior Inspector Clouseau, with too many of the jokes either obvious or just falling flat. There are minor chuckles throughout most scenes, but very few big belly laughs. Miller is excellent in the role of suffering assistant, however, and Malkovich clearly has a lot of fun with his role. You also get Natalie Imbruglia doing a decent job as the beautiful woman mixed up in everything somehow.

There's something to be said, of course, for entertainment of this nature. Genuinely fun for all, fairly inoffensive, and paced and timed almost to perfection. In that way, and with the 007-like music cues running through it, this works well. It just didn't make me laugh as much as expected, considering how much I often enjoy Atkinson's style of comedy.

Here's a triple-pack for you.
Americans can buy the same set here. 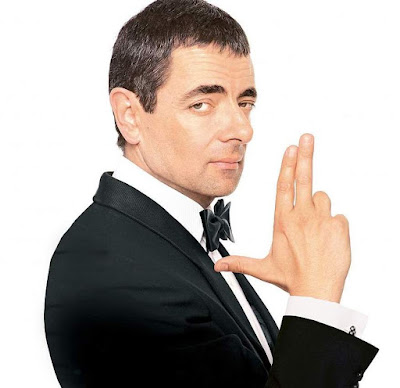