Written and directed by Sally Potter, adapting the book by Virginia Woolf, Orlando makes use of the androgynous form of Tilda Swinton in a lead role that allows her to command the screen for the majority of the runtime.

Swinton is the titular character, commanded by Queen Elizabeth I (Quentin Crisp) to always stay as he is. "Do not fade. Do not wither. Do not grow old." Remarkably, he manages to obey this command, with one major change happening many years later. On a journey that takes in love, art, politics, and more, Orlando wakes up one morning as a woman, which brings another viewpoint and some extra problems.

Difficult to review, Orlando is a well-made, intelligent, and interesting film. But it's also one that, much like the main character, just seems a bit too aloof, slightly disconnected from anything else (it certainly didn't connect with me, I'm afraid).

The script is full of enjoyable lines, as fans of Woolf would expect, and Potter does a great job of wrestling what could have been a troublesome sprawling narrative into something surprisingly straightforward, despite the gender change that occurs about halfway through. Although I am unfamiliar with the source material, a phrase I am aware that I use all too often nowadays, but the episodic structure, whether from the book or decided upon by Potter, feels like the best way it could have been done.

Swinton is as good as ever in the main role, although it's still harder to find her convincing in the male role than it is in the female role, something that could have been improved by some more work on the hair and make-up. Not to insult fans of her performances, but she plays up the androgyny better than she plays up any perceived male traits, as silly as that may sound. Crisp is wonderful in his royal role, a fitting one for someone of his stature in the LGBTQ+ community, and singer Jimmy Somerville (arguably best known for the hit song "Don't Leave Me This Way" when he was the front man in The Communards) pops up to impress with his vocal range. Charlotte Valandrey is a potential love interest for male Orlando, Billy Zane is a potential love interest for the female incarnation, John Wood is good value in the role of an Archduke who thinks very highly of Orlando, and there are small roles for Heathcote Williams, Toby Stephens, and more (including Toby Jones, although his appearance is fleeting).

This is a good film, in many ways, and there are people who will find more of value in it than I did. It just didn't ever fully click into place for me, despite the sure hand of Potter and the many solid performances from her assembled cast.

Buy the movie here.
Americans can get it here. 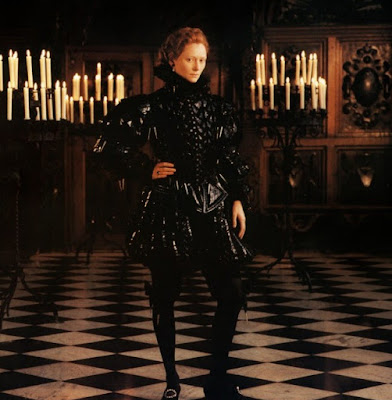