There was a time when I thought that Matthew Perry should have done well in his film career. I always thought he was the funniest main member of the Friends cast (well . . . second to Lisa Kudrow) and he had a way of being cheeky while still remaining likeable. Sadly, you wouldn't know that from most of his film roles. It would be unfair to say that he kept picking duds. He obviously tried to stick with what was viewed as a winning formula, and I happen to like both Three To Tango and The Whole Nine Yards, but it soon became clear that his talent was best contained in episode form, as opposed to lead roles on the big screen.

Serving Sara, the tale of a process server (Perry) who tries to catch an elusive target (Sara, played by Elizabeth Hurley) until he is convinced by her that they should actually turn the tables on her scurrilous husband (Bruce Campbell), is far from the worst thing he has starred in. The plot is light enough to allow the leads space to have plenty of fun, there are some great line deliveries from Perry, and there's one sequence that seems specifically designed to get Elizabeth Hurley out of an everyday outfit and into something much more revealing (which is good news if you're a fan).

Director Reginald Hudlin does well enough, keeping things looking good enough to help viewers forget that most of the budget seems to have been spent on putting the cast together. There's nothing that stands out here, it's all just put together competently enough when it could have easily been a much lazier and sloppier film.

Writers Jay Scherick and David Ronn do a lot better here than they have done with many other entries in their filmography. Although weaker than many better comedies, I wouldn't have believed that this was from the same people who gave us National Security, Norbit, and Baywatch (although, in the interest of full disclosure, I actually rate that one about the same as this - and will always remind people of how easily pleased I can be).

But it's the cast who really help to keep this enjoyable throughout, even if Perry doesn't quite do enough to sell himself as a viable leading man. There may not be any chemistry between Perry and Hurley but they both always seem to be having fun, which helps a lot. Campbell is a lot of fun as the husband who wants to divorce his wife in a way that will leave him with all of his acquired wealth, and Cedric The Entertainer and Vincent Pastore are amusing as, respectively, the boss and competing colleague of Perry's character. Jerry Stiller pops up as a cop who is willing to offer helpful information for the right price, Terry Crews is the tough guy hired to ensure Campbell's character doesn't get served, and Amy Adams has a small amount of screentime as "the other woman".

Serving Sara is the kind of breezy comedy you may well find yourself catching on a TV channel one afternoon or evening. You then watch some of it, don't mind what you see, and watch some more, all the way to the end. Unless someone else picks up the remote control and presses the menu button to remind you of the better options playing on some of the other channels. It's inessential, it's forgettable, and it's perfectly passable comedy entertainment. 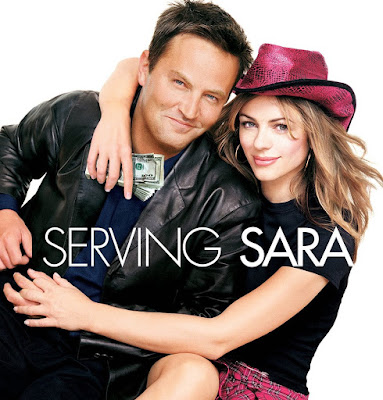