The first time I saw Children Of Men I wondered what everyone else saw in it that I didn't. It was a good film but everyone else seemed to love it. And now I know why. What once felt like a low-key sci-fi movie that I could never warm to now feels like the kind of sci-fi tale warning us of what could be just around the corner. To be fair, it was probably always that way, it's just that when I first saw it I wasn't taking as much notice of the world around me.

Clive Owen stars as Theo, a man trying to keep his head above the dangerous waters of a society on the brink of collapse. There hasn't been a child born for almost two decades and the UK is dealing with an immigration problem by basically capturing them and keeping them in camps until they can come up with an excuse to send the military in to solve the problem with deadly efficiency. Theo also used to be a political activist, information that is used by his ex-wife (Julianne Moore) when she needs someone she can trust to assist a valuable young woman (Kee, played by Clare-Hope Ashitey) in escaping the country.

Directed by Alfonso Cuarón, who also co-wrote the screenplay with a number of other people (incorporating feedback and ideas from Owen), Children Of Men is a wonderful film that mixes hope and despair in a delicate and thoughtful mix. This is mainly thanks to the central character, an understandable cynic, being constantly surrounded by people who cling on to the smallest silver lining as the clouds gather overhead. It's also thanks to the fact that we can still watch the movie and, I sincerely hope, view it as a low point that we would never want to reach. We're already precariously close to it, in places, but I have faith that those with more common sense and empathy will always outnumber the small-minded bigots and xenophobes who keep trying to drag us further and further down into the mud.

Based on a novel by Ps. D. James (yes, THAT P. D. James), this story layers on the horrible  revelations and realisations as we keep moving towards the grand finale, not sure if this will be able to give us a happy ending, considering the overwhelming odds that keep mounting up against the main characters. There are a number of moments that let the action unfold in a number of impressive tracking shots, contributing an effective air of immediacy akin to the found footage format without really showboating in a way that takes viewers out of the movie (it's worth noting that I didn't notice these the first time I watched the film, I was so engrossed, and it was only in the intervening years that I saw them praised and then knew to look out for them on a rewatch).

Owen is superb in the lead role, he's an actor that is rarely given his due and this is one of his very best roles. Grim and determined, he is dragged into the situation in stages, always resisting right up until he realises that he's the only one who knows how to do the right thing at the right stage in the journey. Ashitey is very good in her role, similar to Owen in the way that she's often passive until the moment when she has to put her foot down, and there are strong supporting turns from Moore, Pam Ferris, Chiwetel Ejiofor, Charlie Hunnam, Danny Huston, and Peter Mullan. There is also a fantastic turn from Michael Caine, playing Jasper, a man who deals cannabis and tries to keep himself hidden away from the urban madness until the day when he hopes things start to get better.

If you think Children Of Men is just a dystopian thriller disconnected from the events of our daily lives then see how you feel during the scene in which the characters discuss how an upcoming major event could be manipulated and "improved" for the public by replacing the face of an immigrant with the face of someone white. Prescient sci-fi? This almost feels like a documentary nowadays. 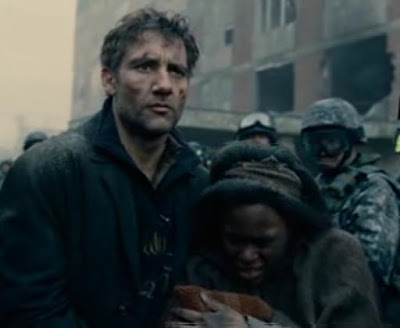