The people responsible for School Spirit didn't have a lengthy career in the movie business, and that's something we should all be thankful for. Because this is a terrible movie. It's not funny enough as a comedy, you can't care about a main character who spends so much of the first half of the film trying to lech on as many women as he can, and the special effects are weak.

Tom Nolan plays Billy Batson, a student we first see trying to seduce the beautiful Judith Hightower (Elizabeth Foxx). It's all going well until she asks him if he has protection. Telling her to stay right where she is, Billy rushes off in his car to get a condom from somewhere. And as he is rushing back, condom in his possession, he crashes. And dies. That's when his dead uncle (Pinky Batson, played by John Finnegan) appears to take him away. Billy doesn't want to go. He still wants to finish his date, and things get even more interesting when he realises that he can turn visible and invisible with a little waving gesture over his head. Cue a number of "fun" escapades that see Billy following women around and seeing them naked.

Look, I get it, the 1980s were a very different time. Attitudes weren't the same as today, especially when it came to any aspects of equality, sexuality, and sex. I can watch a lot of movies from this era and still find enough to make me chuckle. You might judge me for chuckling, but I will chuckle nonetheless. School Spirit, however, didn't make me chuckle. It has all of the worst aspects of the decade packed into its runtime without any of the saving graces. If the main characters had been better then this might have worked, if the gags had been funnier then this might have worked. If the rest of the storyline had been remotely interesting then this might have worked. None of those things were given enough time and attention.

Writer Geoffrey Baere does the bare minimum (no pun intended) to give a plot for the main character to run through. The focus is on nudity for the first half until things turn into a standard "get revenge upon the main authority figure" second half, and neither half works. Director Alan Holleb goes along with the weak script, happy to add nothing to the proceedings until he needs the camera to linger over the naked bodies of young women (sometimes showering, and even sleeping on one occasion, the creepiest scene of them all).

Nolan is clearly too old for his main role, a fact not compensated for by his lack of charisma and acting prowess, and Finnegan can't overcome the fact that his character is written in a way that makes him far too sleazy to like. Foxx makes an impression, thanks to her fine looks, and I wish I could namecheck all of the other women onscreen who were given thankless roles (but I don't have the time or space here). Larry Linville is okay as President Grimshaw, there are okay turns from Roberta Collins, Nick Segal, Frank Mugavero, and Toni Hudson (the typical, from this decade anyway, secondary female character who is actually a lot cuter than the many women being pushed onscreen ahead of her). It's also worth mentioning Danièle Arnaud, who plays Madeleine, a character I resented almost immediately. I can't tell if this was due to Arnaud's weak acting or the fact that she feel for such a repulsive main character.

There are many better comedies to pick from the 1980s, even if you're still after the lowbrow mix of gags and nudity that so many of them dealt in. School Spirit was one I had never heard of before, and it's one I hope many other people never come across.

IF you want to seek out the R1 disc then you can torture yourself here. 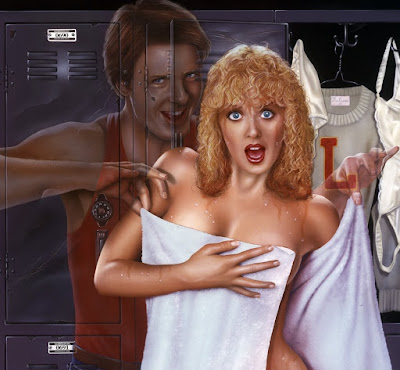