The Hurricane Heist is quite terrible. The characterisations are laughably bad, every scene is overloaded with CGI, and there are moments in which it's very difficult to remember just what the hell is going on, thanks to the choppy editing and fast and loose nature of the screenplay.

Toby Kebbell and Ryan Kwanten play two brothers, Will and Breeze Rutledge, respectively. At the very start of the movie we see the younger versions of their characters in the middle of a super-strong hurricane that kills their father. This has led to Will becoming a meteorologist and Breeze being at a bit of a loss after his time in the military. One of his recent jobs involved working on a generator in a treasury facility that has the task of shredding millions and millions of dollars. When very bad weather causes generator problems, a Treasury agent named Casey (Maggie Grace) calls on Breeze to take him to the facility and help fix things, not realising that while she is out of the picture the place is being taken over by robbers. The weather keeps getting worse, but Casey is with the right people to help her use the conditions to foil the robbers.

Directed by Rob Cohen, who has a few other titles in his filmography in the same vein as this slice of silliness, The Hurricane Heist is the kind of entertainment that you put on when you don't want to think too much. It has spectacle and decent pacing, although anyone after stuff like decent characters, logic, and surprises should look elsewhere.

The script, by Jeff Dixon and Scott Windhauser, is the big weakness. Revelations and character developments are awkwardly shoehorned in between action sequences when the best approach would surely have been to take a bit more time during the opening act to set everyone up before then leaving them to battle robbers and insanely strong wind and rain.

Kebbell and Kwanten may not want to put this film on any highlight reel but at least both know exactly what movie they're in, and they have fun in their roles (with Kebbell involved in a couple of the more enjoyable set-pieces). In fact, everyone at least plays their part well enough, with Grace also doing a decent job as the agent facing overwhelming odds as she tries to foil the robbery, and Ralph Ineson as another agent mixed up in the whole mess. Nobody else really makes much of an impression but that doesn't really matter, as they're mostly there to be a threat to our leads while the hurricane continues to build and build into an even bigger threat.

Not the worst film of last year, not by a long shot, but enjoying this movie is only possible if you know exactly what you're letting yourself in for. It's definitely not as good as it could be, and the first few set-pieces show how good it could have been (I was impressed by both the car chase sequence and the later moments showing Kebbell using the strong wind to his advantage as he threw stuff around a corner to be blown into the baddies), but it's an easy, disposable, watch. 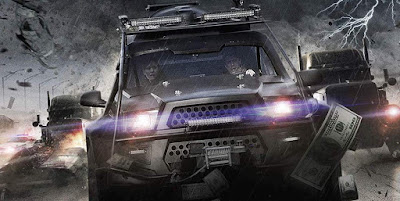