I'll be honest, I thought I was going to either end up bored with Curtains or frequently laughing at it. It's a film I have been aware of for many years, mainly thanks to a famous clip that has been shared around the internet again and again, but didn't think was supposed to be any good. It turns out that it actually IS pretty good, although there are still chuckles to be had (mostly thanks to the wonderful performance from John Vernon as a director with an eccentric approach to casting).

Anyway, here's the plot. In order to prepare for the role she has wanted for many years, a mentally unstable woman in a film called "Audra", an actress, Samantha Sherwood (played by Samantha Eggar), conspires with a director (Stryker, played by Vernon) to get herself committed to an insane asylum. Her plan seems to be working out, until she hears that Stryker is letting a group of six young actresses visit his home to audition for the part. Before you can say "professional rivalry", a killer wearing the mask of an old hag decides to get rid of most of the wannabe-stars.

Despite the fact that the production of this film was a troubled one, apparently director Richard Ciupka and producer Peter Simpson clashed over the ultimate aim of the film, Curtains still manages to do enough to keep it in the top half of the many slasher movies released at this time. The mask worn by the killer is a large part of that, it's creepy and memorable, and the plotting works well enough to allow the corpses to pile up, it's both silly and plausible in all the right ways, especially as the auditioning actresses like to assume that everyone else is just trying to inhabit the role of Audra.

Writer Robert Guza, Jr also does enough to make all of the main characters memorable enough, simply allocating each one with a main talent that allows you to keep track of who is who when they start to be pared down. There's the comedienne (Patti, played by Lynne Griffin), the actress with more experience than the rest (Brooke, played by Linda Thorson), a ballet dancer (Laurian, played by Anne Ditchburn), a musician (Tara, played by Sandee Currie), and an ice skater (Christie, played by Lesleh Donaldson). There's also a woman named Amanda, played by Deborah Burgess, but *spoiler* she doesn't even make it along to the actual auditions.

The standouts in the cast are Vernon, Eggar, and Griffin, although very few of them do a terrible job, especially considering some of the scenes that they have to take part in (and it's almost impossible to watch Eggar in another movie that features a man yelling at women to free themselves and get in touch with a dark part of their psyche without thinking of The Brood). There's also a very small role for Michael Wincott, if you're a completist who needs to see everything he ever did.

It's often slightly daft, it's far from the bloodiest slasher movie you could watch, and it even decides to forego the many opportunities it has for gratuitous nudity, which is a surprise (considering how the subgenre so often uses that to distract from other weaknesses), but Curtains is also a very enjoyable, and even memorable, little slasher film. And the end scenes cap everything off very nicely. 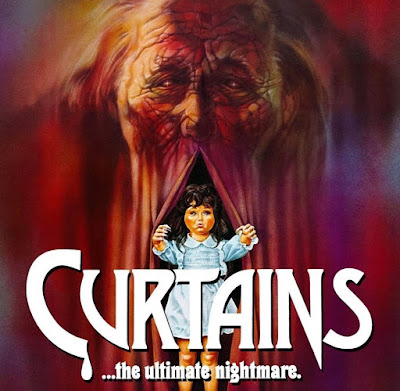