Yule Love It: All The Creatures Were Stirring (2018)

Maybe I was a bit harsh on A Christmas Horror Story. That was my first thought after the end credits rolled on All The Creatures Were Stirring. As I put my thoughts, and rating, in order, I started to think it more and more. In fact, I'll need to revisit that film one day, considering I rated it only slightly higher than this one and now think back on it with a vague memory of constant Christmassy-infused horror fun.

I won't find myself thinking back on this film with such hazy fondness. Co-written and co-directed by David Ian McKendry and Rebekah McKendry, All The Creatures Were Stirring is a Christmas-themed anthology horror movie, hence my mind heading to A Christmas Horror Story, that proves to be almost consistently disappointing. It has a great framing device, the strongest part of the whole film, but nothing much works when it comes to the short tales.

Graham Skipper and Ashley Clements play Max and Jenna, two friends who meet up for a sorta-date during the holiday scene. They buy tickets and go in to see a piece of theatre, entitled "All The Creatures Were Stirring", and that's when things start to get odd. The performances, shown at the beginning and end of each tale before a transition to standard movie presentation, are odd enough, but the whole atmosphere is a bit off. The first tale is a Secret Santa scenario in an office space, but someone has tampered with the gifts. The second tale shows a man who ends up locked out of his car when he just wants to get home for dinner. The third is a modern riff on A Christmas Carol. The fourth shows the consequences of a seasonal hit and run. Last, we get the odd tale of a Christmas dinner with a major difference. Meanwhile, the wraparound material gets weirder and weirder.

It's hard to pin down exactly what has gone wrong with All The Creatures Were Stirring but I'll try to rattle off a list of contributing factors. Bear in mind, however, that this is decent stuff, from a technical standpoint. Although the script isn't anywhere near as good as it could be, the McKendrys can at least be applauded for trying to make everything look and sound as good as the budget allows, and they're helped by a pretty solid selection of main cast members (Jonathan Kite is the main reason I got through the third tale).

Okay, where to begin, where to begin? I've already mentioned my enjoyment of the framing device. No complaints there. And I really enjoy the first tale. It still has flaws but it's a fun start to the proceedings. Things start to sour when you realise that a) none of the stories have a resolution either satisfying or amusing enough, and b) most of the stories don't actually make the best use of the trappings of the season. That may sound silly of me to say, especially when one tale is literally just a truncated and updated version of the famous Charles Dickens Christmas classic, but it's true. Most of the tales feel as if someone remembered at the last minute that they were set at Christmas and then threw some tinsel around. They also feel very disconnected from one another. I don't need all modern anthology films to have criss-crossing narratives and connective tissue but I do think some more hints at a cohesive mythos would have helped these stories to feel more satisfying, even without any proper resolution.

It's obvious why the McKendrys decided to take this route, having already made a number of short films on the way to this feature debut. They must have thought that an anthology horror would allow them to basically piece together a few shorts and stay within their comfort zone. The final product reminds us, and perhaps them, that there's a bit more to it than that. I'll be interested to see what they do next though, especially if they move towards filling a standard runtime with just the one story to tell.

If you're a multi region kinda person then you can pick this up here.
Americanos can pick it up here. 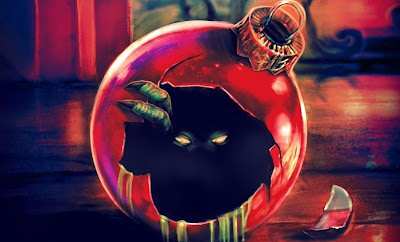