Here is a perfect example of a film that, while not necessarily as bad as the very worst of them, stands out in the way it saps some fun out of the central concept and makes everything worse by over-reliance on CGI to make everything possible.

Robert Downey Jr. plays the man who can talk to the animals, and he has decided that his Dolittle should have a strong Welsh accent. He also doesn't want to deal with people any more, spending many years locked away after the loss of his adventuring wife. He is forced to change, however, when young Tommy Stubbins (Harry Collett) sneaks in to his home, carrying with him a squirrel that he accidentally shot. Dolittle is also forced to accept a request to help save the life of Queen Victoria, who has been struck down by a mysterious malady that can only be cured by the fruit of a tree that nobody has ever managed to reach. It's time for an adventure, and Dolittle has plenty of animals to help him on his quest. He also has at least one person, Dr. Blair Müdfly (Michael Sheen ), trying to stop him from succeeding.

After a slightly unsteady start, scenes giving viewers a quick summary of the life of Dr. Dolittle and then showing him talking to animals IN animal noises before we then get to the more enjoyable format of Dolittle and the animals all talking in English, Dolittle becomes a decidedly okay bit of family entertainment. The animals are enjoyably exotic (with three of the main characters being a parrot, voiced by Emma Thompson, a gorilla, voiced by Rami Malek, and a polar bear, voiced by John Cena),  things look bright and lively enough, and there's a sense that the whole adventure could be a lot of fun.

It's a shame that the script, written by Doug Mand, Dan Gregor, and director Stephen Gaghan, seems to have been written with the idea that the visuals and lead performances will carry everything along. The lead performances, voice acting aside, don't feel as strong as they could be. Downey Jr. may be having fun, I guess, but he doesn't feel right for the role, as much as I often like his onscreen presence. Sheen is more enjoyable, a proper pantomime villain, and Antonio Banderas is a welcome addition, although not involved for long enough. The same can be said for Jim Broadbent. Young Collett does fine, but he's really there to be caught up in the middle of the animal shenanigans. And while it is a bit of a coup to rope in such a variety of big names, including Ralph Fiennes, Tom Holland, and Selena Gomez, for the animals, few of them really add to their roles, unlike the standout, an ostrich voiced by Kumail Nanjiani.

It's also a shame that the makers of the film have decided to let the visuals carry so much of it when the visuals are, despite the fact that some may find me overly critical here, a bloody mess. So many scenes lose any sense of magic because it feels like CGI interacting with CGI, against a CGI background, with some more CGI being used to add flourishes here and there. I wouldn't mind if it was better, and some of the scenes have to contain what I assume is a lot of seamless CGI complementing the action, but some moments are jarring in how obviously fake they look. There's one scene in which Tommy is being taken on the back of a giraffe to catch a departing ship that looks, well, it looks as if it could have been lifted directly from some high-quality BBC programme from the early 2000s.

Younger viewers should find enough to enjoy, and there's an amusing fart gag during the finale that will prompt giggles, but this is a horrible attempt to reinvigorate a property that was handled better back in the late '90s. Maybe we'll get something better next time, when someone more suitable is put in the lead role. 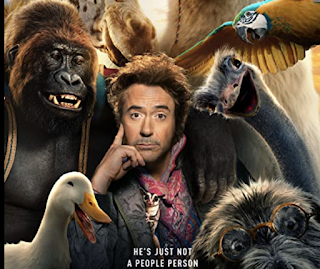