Guy Ritchie seems to be on a bit of a roll at a moment, having made use of his blockbuster success with the Sherlock Holmes movies to play around a bit more with projects that feel more in line with his earlier works without just feeling like regurgitated "mix tapes" of his past glories. Wrath Of Man may be a remake of a 2004 movie, Le Convoyeur (sadly, I haven't seen the original yet), but it's also great material for Ritchie to slot one of his favourite stars into.

There's also a great remix of Folsom City Blues, familiar already to anyone who saw the trailer. Yes, it's so good that I am mentioning it here before I forget to mention it at all.

Jason Statham is H, a man who gets himself a job at a cash truck company. The company had a truck robbed some months before, a robbery that resulted in some deaths, but H doesn't seem bothered by the risk inherent in his new role. In fact, he seems to want robbers to try their luck with him. He definitely has his own agenda, and there's a lot more to him than he is revealing to his new work colleagues.

Having worked on the screenplay with Ivan Atkinson and Marn Davies (who also worked on The Gentlemen and the upcoming Operation Fortune: Ruse de guerre), Ritchie uses a familiar bag of tricks - the friendly faces, a non-chronological approach to the main storyline, a good helping of dry wit - to sugarcoat what may well be his darkest film yet. The film is broken into a number of chapters and one, entitled "Scorched Earth", stands out as being a mix of the cinematically stylish and the incredibly nihilistic. It's a flesh-coloured trip through a circle of hell that shows Statham's character beginning his quest for whatever it is that he's seeking.

Aside from Statham, being as great as ever in the lead role, the rest of the cast includes some fine supporting turns. Holt McCallany enjoys one of his best ever movie roles as Bullet, one of the main company staff members, straight-talking and with the potential key to information that would prove invaluable to H. Josh Hartnett is good fun as the "all mouth, no trousers" Boy Sweat Dave, Eddie Marsan is the depot boss, Jeffrey Donovan is someone who thinks they have a perfect robbery planned, and Scott Eastwood does his best work yet (not saying much though, compared to how bland so many of his other performances have been) as Jan, a robber with the kind of attitude that you just know is going to lead to trouble. There are other people doing good work here - Andy Garcia, Niamh Algar, Alex Ferns, Darrell D'Silva, etc - but they're very much minor moons orbiting the planets at the heart of the big set-pieces, although D'Silva still does enough to make himself an easy highlight.

I'll want to see the original movie at some point, and some people have said that it's a superior work, but this surprised me with how good it was. It's a classic tale of revenge, and the structure of the narrative helps the pacing and increases the tense gathering of thunderclouds and the impact of the storm that you just know is coming along in the third act. It's not one to watch if you want an action thriller grounded in any kind of reality, but it's a perfect choice if you want a superior Statham vehicle that has plenty of bloodshed, fun dialogue, a cause you end up rooting for, and a number of set-ups that are all paid off before the end credits roll. 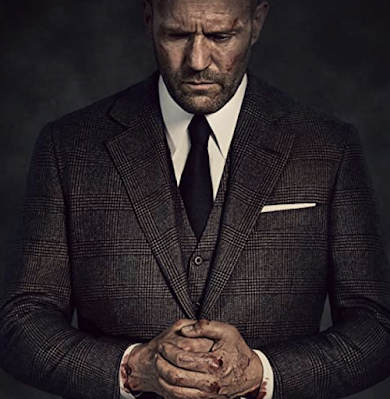