Although I can only speak from my own place of personal ignorance, it can be hard to single out world cinema stars as quickly as the already-familiar US and UK actors being praised for breakout roles. They are not in every mass product that is being shoved down our throats, and they can often be much more chameleon-like in their range of roles, due to the fact that the film is not just being sold on their name. I am happy to say, however, that I am now a die-hard fan of the immensely talented Adèle Haenel, the actress who gained such great reviews for her performance in Portrait Of A Lady On Fire, another film by writer-director Céline Sciamma. This is the feature debut from Sciamma, and it is only the second onscreen role for Haenel, but both already show the talent that would become more and more obvious over the next dozen years (and here's to many more).

This story revolves around three 15-year old girls. There's Marie (Pauline Acquart), so impressed by the school synchronised swimming team that she wants to join them. There's Anne (Louise Blachère), a member of that swimming team, and friend of Marie. And there's Floriane (Haenel), the team captain, and the subject of numerous rumours about her active sex life. Marie manages to connect with Floriane, growing closer and being taken into her confiidence, which leaves Anne feeling increasingly frustrated and lonely. Unwittingly, a love triangle of sorts is formed. Others enter and leave the picture, but the focus stays on Marie, Anne, and Floriane.

Sciamma has such a great way of allowing her characters to explore their identity, and their connections with others, without it ever feeling exploitative. Just by the fact that it's not filtered through the male gaze, things are much more impressively and sensitively handled. The fact that these characters are young girls feels like we are seeing them at just the age when they are starting to get caught up in a maelstrom of different strong emotions while they figure out who they are, who they want to be, and who they want to be intimate with.

It helps that there's not a bad turn from any of her three leads. Haenel is the standout, and the one who unwittingly causes the biggest change in the moods of the characters, but Acquart is sweet and vulnerable throughout, but not as naive as some may assume, and Blachère is shown to act up when starting to feel abandoned, without it being a one-dimensional and over the top turn. The worst character in the film is a young man named François (Warren Jacquin), guilty of the kind of behaviour that a teenage boy will often put on when he becomes the subject of some female attention.

Sciamma has definitely grown into a more accomplished film-maker over the course of her career, but this is a strong debut. You should check it out if you’re a fan of her work, a fan of Haenel, or both. 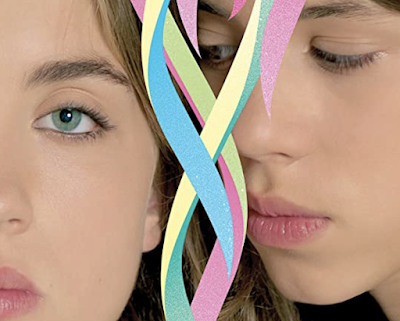