Dwayne Johnson is a tough and tenacious Interpol agent named John Hartley, Ryan Reynolds is a quick-talking art thief named Nolan Booth, and the two of them are about to be manipulated into working for the elusive and intelligent master criminal known as The Bishop (Gal Gadot). The prize that everyone is after is a lost bejewelled egg that was gifted to Cleopatra centuries ago. There were three eggs in total, but nobody seems to know the location of the third. Well . . . maybe Nolan Booth does. If he finds it, it can make up the complete set, which would lead to the biggest payday for whoever got them into the hands of the right buyer. Set-ups, pair-ups, and balls-ups ensue.

A lot of people weren't impressed by Red Notice. Despite the obvious big budget, the ridiculous set-pieces, and the attractive stars, many were left cold by the way they felt it was just like the objects at the heart of the plot. I can't deny that this is pretty and hollow, it also has a twist or two that can be spotted a mile away, but I also can't deny that I had fun for most of the 2-hour runtime. I like Johnson, Reynolds, and Gadot, even when they're just doing something that they've done at least a dozen times before.

The feeling of everybody working very much in their comfort zone also extends to behind the camera, with the writing and direction from Rawson Marshall Thurber. This is his third movie with Johnson, to date, and it almost feels like a bridge between the exuberant fun of Central Intelligence and the mishandled straight action of Skyscraper. The script obviously gets the characters from A to B to C, and so on, but there's a strong feeling that most of the non-exposition dialogue came from the cast just improvising. Which is fine when the results are funny, and some of the results are funny, but not so fine when the stars feel like they're just trying too hard with every line.

Johnson does what he does well. He's the muscle, and he pairs up well with Reynolds, although I prefer his comedic pairings with Kevin Hart (the absolute ineptitude and fear of the characters played by Hart allow the coolness and strength of Johnson to play funnier). Reynolds is playing a version of the character that he's generally been playing for the past decade or so. He's a man who, no matter what the situation, will insist on delivering a quip that he thinks will either make for a fine insult, a fine compliment, or some fine last words. I like Reynolds, but I can always see why those who aren't really that big a fan of him will hate most of his performances. Gadot is always in control when onscreen, depicted as always being the smartest person in the room (as well as being able to handle herself physically), and she's good in her role, although her limited work in the field of comedy shows that it's not exactly her forte.

Most of the criticisms that you will have already seen are totally valid. The plot is very predictable, very simplistic, and a bit tiresome. None of the stars are at their best. The set-pieces are middling, at best. Things could have been greatly improved by polishing the script and tightening everything up. The soundtrack and score even feel a bit half-assed.

I still enjoyed myself though. Not enough to mark this as some kind of new favourite, and I probably won't ever revisit it, but I can see why the numbers were big when this first dropped on Netflix. It was a shiny blockbuster delivered straight into our homes, for better or worse, and I wasn't majorly disappointed when I opted for this as a centrepiece of my weekend viewings. I'll probably even watch a sequel, but I hope they do a better job with it. 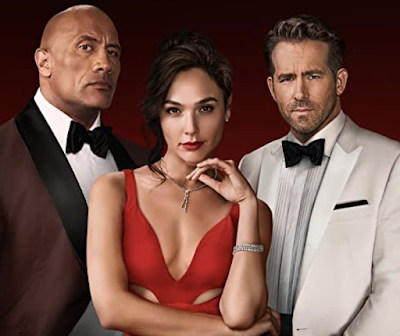