Directed by Glenn Payne, who also has a main starring role, and written by Casey Dillard, who also has a main starring role, Killer Concept is a film that definitely had the potential to be a fun, meta, slasher movie blurring the lines between onscreen reality and onscreen fiction. Unfortunately, it decides to continually lessen the fun factor en route to an ending that feels like nothing more than a poor Saw rip-off (even down to the music cue).

Seth (Coley Bryant), Holly (Dillard), and Mark (Payne) are trying to work together on a screenplay that will tell the story of a number of murders in their local area. The murderer is still at large, which means the screenplay will have an added frisson to it. But while arguing over the various details, one of the writers seems to have much greater insight than the others. Are they more in tune with the material, or are they actually the killer?

Although I am being coy with the plot summary here, Killer Concept reveals its tricks quite early. This is detrimental to the viewing experience, with ambiguity and playfulness cast aside in favour of disappointingly obvious reveals that start to pile up, one on top of another, without managing to make the most of the dark humour of the premise.

The three leads do decent work, but they are often hampered by Dillard’s script. Both Bryant and Payne are playing characters who feel a bit too one-note, especially while the former is playing the abrasive one of the trio. Dillard herself has the best character, perhaps that is where she was focusing during the writing process, and she also delivers the best performance. There are some other people onscreen, mainly potential murder victims, but this is mostly a three-hander. It’s a relief that the leads are up to the task, because otherwise this would have been unbearable.

Payne’s direction is simple and serviceable, I guess, but it is a step down from the last film I saw from him, Driven (2019), which was also written by Dillard. It can be difficult to cover up for limited resources in the world of independent film-making, but Payne doesn’t do himself any favours. Although competent, there’s no obvious growth on display here.

Maybe we will see an improvement with their next film. I will certainly keep giving them a chance, because I think they keep getting close to making something really good. This isn’t it though. Sadly, it falls just below average. 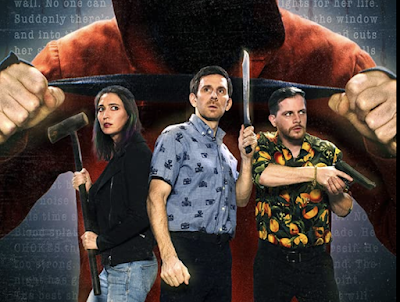