Sometimes you want art and sometimes you want entertainment. Then there are the times when you want something so enjoyably bonkers that you can't quite believe what you just watched. Butcher, Baker, Nightmare Maker definitely lands in the latter caterory for me.

Things begin with a major car accident worthy of the Final Destination films, and it's genuinely up there with the best of these things I have seen onscreen (involving people tangling with a large truck full of huge logs and not winning out). We then move forward a number of years. Billy (Jimmy McNichol) lives with his Aunt Cheryl (Susan Tyrrell), the woman who has raised him for many years since the day of that tragic car accident. The two are very close, which is why Cheryl is worried about Billy getting a good scholarship and leaving her for his years of further education. Cheryl starts to unravel, first killing a TV repairman who she accuses of trying to rape her, and then drugging and/or killing anyone she thinks can help to separate her from her Billy.

Directed by William Asher, who has a background stuffed full of great TV work (many episodes of I Love Lucy and Bewitched among them) and various beach party movies, as well as some other fare, this is enjoyably camp stuff that doesn't take long to show the real insanity of the killer. It then spirals quickly, leading to a third act that is anything but dull.

The screenplay has three names credited to it, although it is perhaps unsurprising to see that neither Steve Breimer, Boon Collins, or Alan Jay Glueckman have many screenplays to their name. Breimer just wrote this, Glueckman seems to be more a story idea kind of guy, and Collins has an even dozen to his credit, half of those also putting him in the director's chair.

Tyrrell is a lot of fun here, in all the right ways. Her performance is generally unrestrained and wild, turning her more and more into a complete maniac with each passing minute of the runtime. McNichol does what is asked of him, simply acting like a teen who doesn't suspect too much is horribly wrong until it's too late. Julia Duffy is nice enough, playing Julia AKA the threatening presence that will help Billy to leave his Aunt Cheryl. Britt Leach plays the slow and steady Sergeant Cook, his logical and calm approach juxtaposed nicely alongside Bo Svenson's bigoted asshole Detective Carlson. Other cast members worth mentioning are Marcia Lewis, who plays a neighbour named Margie, Steve Eastin, as a gay coach depicted in a surprisingly straightforward way for the early '80s, and Bill Paxton, billed as William Paxton for his role as a bully named Eddie.

There's nothing technically brilliant here, that opening car death sequence aside, but everything is done competently enough, considering the material and the tone. Everyone, both in front of and behind the camera, knows what kind of movie they are making, and they all do their bit to ensure it's a fun 96 minutes. I'd happily rewatch this, even if others may roll their eyes and dismiss it as being far too ridiculous. 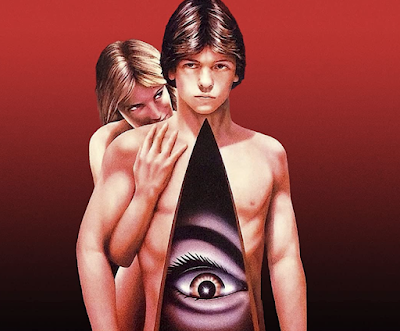