Like many people, I had heard good things about The Empty Man over the past year or so. Also like many people, I didn't hear any of those good things while it was being messed about with a half-assed release schedule before basically being dumped straight to a streaming service. I really can't even recall if it had any kind of UK cinema release, between the non-existent marketing campaign and the pandemic that put so much on hold.

Written and directed by David Prior, adapting a graphic novel by Cullen Bunn, The Empty Man is a strange beast. It's overlong, for a start, clocking in with a runtime of 130+ minutes, and it doesn't really draw things together in a way that is satisfying enough for a big finale. That's okay though, because it is impressively consistent with the spooky atmosphere and scares, helped enormously by a sound department that has created arguably the best audio tapestry I have heard in a horror film in the past few decades.

Things start with a group of people trekking through some snowy mountain region. It is 1995. One of the party, Paul (Aaron Poole), ends up affected by a strange skeleton that he encounters. Things don't end well.
We then move to present day. Well . . . 2018. James Badge Dale plays James Lambrosa, a former detective who now makes a living selling home and personal security equipment. He is still grieving the loss of his wife and child, both having died in a car accident a year before, but ends up being able to keep himself busy when a friend enlists his help in locating her missing daughter, Amanda (Sasha Frolova). This leads James to discovering the idea of The Empty Man, a mythical entity at the centre of a fiercely loyal cult.

Unsettling from start to finish, The Empty Man is probably harder to sell to anyone who has seen the poster/tagline. "THE FIRST NIGHT YOU HEAR HIM. THE SECOND NIGHT YOU SEE HIM. THE THIRD NIGHT HE FINDS YOU." It brings to mind the lesser horror movies we've had to endure, such as Slender Man or, urgh, Smiley, or any other number of films that have people doing silly things to call upon a spirit that will then cause harm and death. It's not like any of those films, with the spooky central figure something only really seen in a couple of enjoyable set-pieces. For the majority of the movie, considering his grief and views on the world around him, James could easily be said to be the empty man of the title. Things become even clearer as he moves closer to the truth, but it's also quite obvious in every scene.

Prior knows what he's doing when it comes to the pacing. Although the runtime is hefty, including that snow-covered intro that is just over twenty minutes long, before we even see the main title screen, it doesn't feel like a slog to get through. Big moments are impactful, small details are strewn throughout the film to keep you on your toes, and that impressive sound design and musical score (I wouldn't be able to single out when noise becomes music and vice versa) underlines everything with a perfect eerieness.

Dale gives one of the best performances I have seen from him, always looking competent but far too quick to jump out of his depth, and he carries the film effortlessly. The script and performance allow his character to be a potential "hero" without trying to smooth off all of the rough edges. Frolova is fine as Amanda, although she isn't onscreen for a very long time. The same goes for Poole. Both of these actors play characters who cast a long shadow over the proceedings with their absence, which also ties in nicely with the entire idea of The Empty Man. Ron Canada is always a welcome presence, and here plays a perplexed detective, and Stephen Root manages to be strangely charismatic and unnerving as Arthur Parsons, a man with a high position in the cult hierarchy.

Despite knowing how well it does much of what it is aiming for, it's easy to see why The Empty Man could remain a "hard sell" to horror movie fans. It's a hard one to categorise, it doesn't have an easy "hook", and it takes time to unravel the interesting ideas at the heart of it. But that's also why more people should seek it out. It's just a bloody good horror movie. 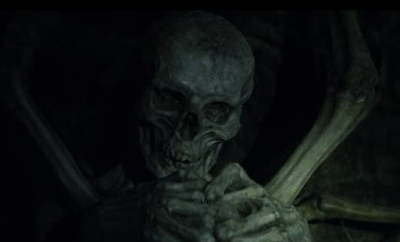