I haven't had much luck lately with a couple of interesting titles that I had hoped to enjoy, films that I presumed may have some horror genre tropes in the mix, even if they ended up playing out more like a straightforward drama or thriller. The Lost Daughter left me underwhelmed, as impressed as I was by Olivia Colman in it (who impresses me with everything she does), and now it's the turn of The Night House. This is much more of a simple genre piece, and moves further into absolute horror with each predictable bit of plot development, but it's yet another film not deserving enough of the central female performance (Rebecca Hall this time around).

Hall plays Beth, a teacher who is grieving the sudden death of her husband, Owen (Evan Jonigkeit). Owen took a small boat into the middle of the lake beside their home and shot himself in the head. Beth is understandably pained and puzzled by this, having had no idea that Owen felt any such depths of despair. She starts to dig around into the life of the husband she starts to suspect she never really knew, all while being pushed on by some presence that visits her at night.

Directed by David Bruckner, who previously gave us the excellent The Ritual, as well as segments in both V/H/S and Southbound, this is a film that suffers from a script, written by Ben Collins and Luke Piotrowski, stuffed full of familiar moments to anyone who has seen any popular supernatural thriller from the last few decades. It also feels unsure of itself, trying to play out as a supernatural-tinged drama for most of the runtime before diving fully into the potential horror of the situation when it feels like too little too late.

It's fortunate that Hall is in the lead role, she's an actress who has been delivering some great performances for some time now (although her project choice isn't on par with her talent, landing her in films as diverse as The Town, The Awakening, and, ummmmm, Holmes & Watson) and this is a fantastic turn from her. Her journey is depicted in a way that feels realistic and believable at all times. Sarah Goldberg is good support, playing a caring friend named Claire, but the other standout performance comes from Vondie Curtis-Hall, playing a neighbour/friend who doesn't want to see Beth's life undone by the grief she is processing. Stacy Martin also does well, playing a young woman named Madelyne who Beth finds after discovering photos of her on her deceased husband's phone.

This isn't a bad film. It's just a film that doesn't have any faith in any direction it could take, and therefore seems to end up trying to do a bit of this and a bit of that, leading to end results that feel half-baked and half-hearted. Bruckner directs well enough, despite the fact that Collins and Piotrowski undermine things with a premise that feels very much like it could have been entitled The Entity That Jack Built. 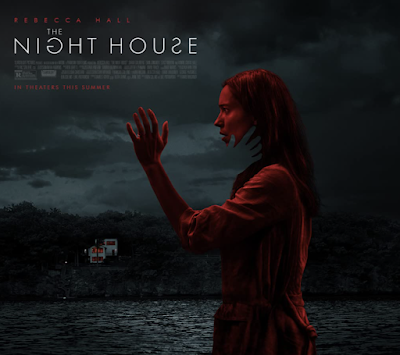